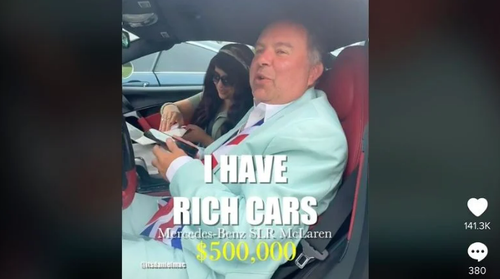 Apple’s Vice President of Procurement, Tony Blevins, is out at the company after making a “crude comment about his profession” in a TikTok video that was published on September 5.

Blevins joked that he fondles “big-breasted women” for a living in the video, Bloomberg reported this week. He had been approached by TikTok and Instagram creator Daniel Mac to participate in a series where owners of expensive cars are asked about what they do for a living.

He was stopped when parking his Mercedes-Benz SLR McLaren, a car worth “hundreds of thousands of dollars”, the report says.

When asked about what he does for a living, he responded: “I have rich cars, play golf and fondle big-breasted women, but I take weekends and major holidays off.” He also joked that he had a “hell of a dental plan”.

As Bloomberg noted, the line is an homage to the 1981 movie Arthur, where the main character describes his career by saying: “I race cars, play tennis and fondle women, but I have weekends off and I am my own boss.”

The video was taken at a car show in Pebble Beach and it garnered more than 40,000 likes on Instagram and 1.3 million views on TikTok.

Blevins’ actual job is striking deals between suppliers and partners for Apple. Recently, he helped navigate deals for the company with Globalstar, Qualcomm and Intel, the report notes. He is in charge of “driving down the costs” of the critical supplies Apple uses for its products.

The company conducted an internal investigation into his remarks and removed his team – including about 6 people who reported directly to him and several hundred others under them – from his command.

He had been at Apple for 22 years prior to being let go. He was part of a group of about 100 VPs at the company, and just one of about 30 executives, that report directly to either CEO Tim Cook or COO Jeff Williams. Williams ultimately made the call to let Blevins go, the report says, and he will oversee Blevins’ team for the time being.

In a statement, Blevins said: “I would like to take this opportunity to sincerely apologize to anyone who was offended by my mistaken attempt at humor.”