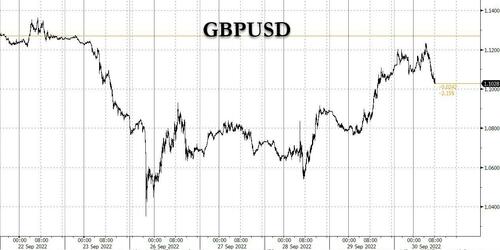 After surging for three days in a row, at one point unwinding all of its losses since last Friday’s shock mini-budget announcement, on expectations that UK PM Liz Truss may reverse on her fiscal policies and some speculating that Chancellor Kwarteng may exit the government…

… the pound resumed its plunge after 5am ET when it emerged the UK Treasury hasn’t asked its fiscal watchdog to accelerate its economic forecast, confirming that the government has no plans to backtrack on the economic strategy roiling markets.

As Bloomberg adds, there are also no plans to alter the timetable for Chancellor of the Exchequer Kwasi Kwarteng to publish a full forecast from the Office for Budget Responsibility on Nov. 23, alongside his medium-term fiscal statement, the Treasury said Friday in a statement following a meeting between Truss, Kwarteng and OBR Chairman Richard Hughes.

The unusual meeting between Hughes and the government’s top two figures comes after Truss’s new administration came under heavy fire from economists and politicians for announcing last Friday the biggest set of unfunded tax cuts in half a century, while declining an offer from the OBR to provide an independent forecast.

The fallout was dramatic, with the pound plunging to a record low against the dollar earlier this week, and the Bank of England forced to intervene to prevent a meltdown in the bond market. Yet despite that, the outcome of Friday’s meeting shows Kwarteng and Truss are sticking to their guns, despite global from such places as the IMF and the White House.

Earlier on Friday, Andrew Griffith, a junior Treasury minister, sought to justify the lack of a forecast last week by saying the government had more plans to announce that needed to be factored in.

Following the news that the market was wrong in expecting a reversal, the pound fell against the dollar, having earlier risen on market expectations that the government might reassess its fiscal plans. It was 0.4% lower at $1.1075 as of 12:30 p.m. in London.

Still, some stability may be on deck: as Bloomberg notes, Truss will be hoping that visibly engaging with the fiscal watchdog will help to calm market nerves. Yet much depends on what the OBR makes of her economic plans, especially given the tax cuts were announced before accompanying policies were finalized. The government is still drawing up its medium-term fiscal plan, which is key to restoring its battered credibility with markets.

In Friday’s meeting, Hughes is likely to have run Kwarteng and Truss through the early forecast and indicated what savings the chancellor will need to bring debt down as a share of GDP in the fifth year of the outlook, a person familiar with the process said. However, the person said the OBR’s briefing is likely to have been uncomfortable for the government. In the 12 years since it was created, the watchdog has never increased its estimate of the UK’s long-term average growth rate — something Kwarteng is relying on to help close the budget deficit and bring the national debt under control. It is likely he will need to find tens of billions of pounds of savings, if he wants to stick with the announced £45 billion ($50 billion) of tax cuts and restore his party’s reputation for sound money.

The OBR said after Friday’s meeting that it would deliver the first iteration of its forecast to Kwarteng on Oct. 7. “The forecast will, as always, be based on our independent judgment about economic and fiscal prospects and the impact of the Government’s policies,” it said in a statement.

Meanwhile, amid the fallout from the market turmoil, the opposition Labour Party has soared to a record 33-point lead in YouGov polling, and while the next general election is not due for another two years, the atmosphere is febrile heading into the Tory party’s annual conference, which starts Sunday in Birmingham.

In a private WhatsApp message to Tory MPs, Kwarteng on Thursday pleaded with colleagues to back the government’s plans and not to air their criticism in public. “We need your support to do this as the only people who win if we divide is the Labour Party,” he said in the message seen by Bloomberg.

Speaking on BBC Radio 4 on Friday, senior Tory backbencher Geoffrey Clifton-Brown urged Truss’s government to bring forward “as much as possible” its next financial statement to give a full picture of its plans.

“We’ve got to give her a little bit of time,” said Clifton-Brown, who is also an executive of the 1922 Committee of rank-and-file Tories that decides party rules. “And time especially to try and reassure the markets that they know exactly what they want to do for the economy.”

As Bloomberg concludes, those kinds of remarks so soon into an administration will ring alarm bells for Truss, who has made the most turbulent debut of any British prime minister in peacetime.