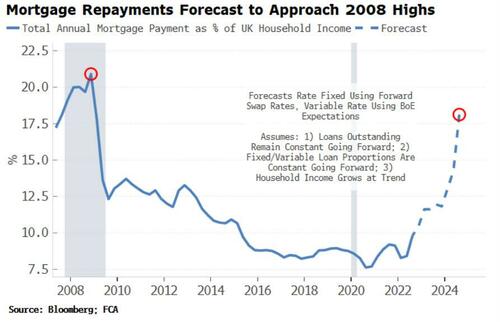 Last week, we quoted Deutsche Bank’s Jim Reid who pointed out several striking facts: according to the FCA, some 26% of the total outstanding UK mortgages are variable rate and thus dependent on where the BoE’s bank rate is. It is currently 2.25% but markets are now pricing in a terminal rate above 6% which would be a huge shock if it got close to happening over the next 6-9 months as is priced in. While 74% of mortgages are fixed (mostly between 1-2%), half of these will need to be refinanced within the next 2 years, with half at a fixed rate beyond 2 years.

So, Reid calculated, 26% of mortgage payments are at risk of imminent increases, 37% at risk over the next two years if rates don’t rapidly fall, and 37% can ride out this storm for a few more years. The DB strategist concluded that “the UK housing market is in for a huge amount of pain ahead,” unless the BOE were to somehow monetize all the upcoming debt issuance and sends rates back to zero…. which as we explained, is one of the real reasons why the BOE panicked and restarted QE.

Today, Bloomberg’s Simon White picks up on this startling repricing, and writes the following:

The projected rise in UK interest rates after the recent fiscal announcement threatens to take total mortgage repayments back to GFC levels. But this increases the chance of implicit government support for the mortgage market, which should soon aid already underperforming UK homebuilders.

As cack-handedness goes, you can’t get a much better example than how the UK government announced a raft of new fiscal measures in its so-called mini-budget. Despite the fact several of the tax cuts were reversals of rises that had not taken place yet, a series of missteps and unforced errors caused the budget to trigger a wave of selling in UK assets, exacerbated by instabilities inherent to pension-funds’ asset-liability matching criteria.

The sharp rise in rates across the curve will soon pass through the economy. One of the biggest feed-through mechanisms will be from mortgages, outstanding balances of which total more than £1.6 trillion. To forecast the potential impact from the rise in rates, I projected what fixed and variable mortgage rates could rise to over the next two years, and calculated what the total mortgage-repayment cost would be versus household income.

As the chart below shows, the mortgage repayment/household income ratio is forecasted to rapidly rise to levels not seen since the Lehman crisis in 2008.

Back then, though, almost half of outstanding mortgages were on variable rates, compared to 15% now. This meant cutting rates had an immediate impact on reducing the repayment burden for households. Even if rates do not rise as high as currently projected, total repayments are likely to increase to levels problematic for an already-weakening economy.

Furthermore, when mortgage holders come to refinance, they may find they don’t meet affordability tests (rates have jumped to ~5%, but that means the bank will want to know if holders can meet repayments if rates went to e.g. 9%).

The risk of a wave of forced selling therefore suggests the government will have to intervene in the mortgage markets to ensure this does not happen (for instance by making affordability tests less onerous, or sanctioning the loan-maturity extension).

So optically, things look bad for UK housing, but it is often darkest before dawn. UK homebuilders – especially those more focused on London, which stands to benefit more from the fall in GBPUSD – are already depressed and underperforming, with much bad news priced in. This leaves them poised to surprise to the upside. 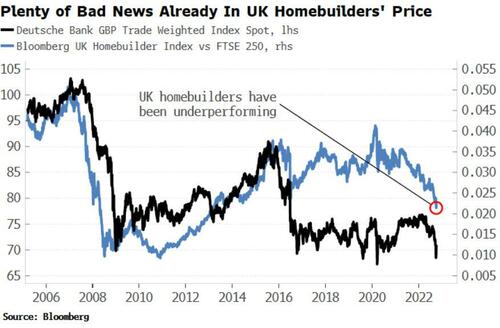