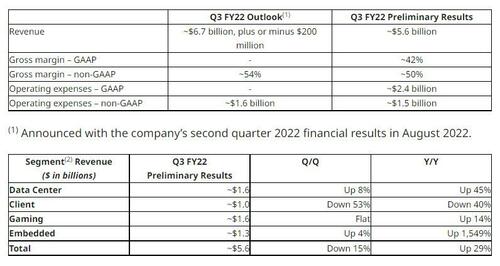 Chip giant Advanced Micro Devices slumped, and dragged peers such as Intel and others lower in after hours trading after the company released preliminary Q3 results which fell were a disaster, some 20% below analyst the company’s own guidance from just two months ago, and sparking fresh concerns about a sputtering market for personal-computer chips which has sent Intel to the lowest level in seven years.

The company said that “preliminary results reflect lower than expected Client segment revenue resulting from reduced processor shipments due to a weaker than expected PC market and significant inventory correction actions across the PC supply chain.”

And in the latest confirmation that the inventory and margin-crushing bullwhip effect is now everywhere and about to unleash a deflationary tsunami (just as we warned back in May), AMD said that non-GAAP gross margin will be approximately 50%, down sharply from the company’s previous guidance of 54% announced just two months ago.

AMD blamed the gross margin shortfall on “lower revenue driven by lower Client processor unit shipments and average selling price (ASP). In addition, the third quarter results are expected to include approximately $160 million of charges primarily for inventory, pricing, and related reserves in the graphics and client businesses.“

“The PC market weakened significantly in the quarter,” said AMD Chair and CEO Dr. Lisa Su. “While our product portfolio remains very strong, macroeconomic conditions drove lower than expected PC demand and a significant inventory correction across the PC supply chain. As we navigate the current market conditions, we are pleased with the performance of our Data Center, Embedded, and Gaming segments and the strength of our diversified business model and balance sheet. We remain focused on delivering our leadership product roadmap and look forward to launching our next-generation 5nm data center and graphics products later this quarter.”

AMD stock plunged on the latest dismal report, but has since recovered more than half the drop. 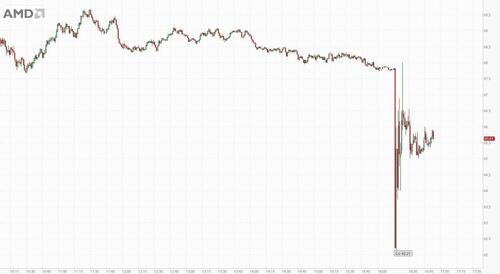 Other names hit by the ugly preannouncement include INTC and NVDA, which will likely be next to preannounce catastrophic Q3 results.