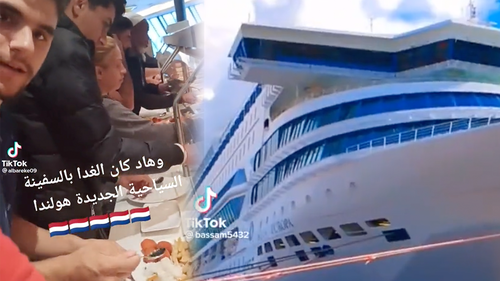 As inflation in the Netherlands soars to 17.1%, migrants will enjoy free buffets, luxury cruise ship cabin accommodations, and free heating for the winter…

Migrants in the Netherlands are bragging about their new luxury cruise ship accommodations on TikTok and other social media platforms, with the news coming at a time when the country is facing skyrocketing inflation and an uncertain economic future.

In the municipality of Velsen, up to 1,000 migrants have been moved onto the Silja Europa cruise ship, which will now serve as a floating asylum shelter.

In the videos posted to TikTok, migrants give viewers tours of their new home, which features spacious cabins and hot buffets, all of which will be paid for by Dutch citizens. The videos have been reposted on a number of other social media platforms as well.

In the Netherlands, the govt has hired a cruise liner to accommodate migrants there because the migrant reception centre is overcrowded and the migrants are now filming how they live in luxury and eat from the buffet. Liner will spend at 6 months in the port of Amsterdam. pic.twitter.com/HMZfq2C1oy

Velsen Mayor Frank Dales celebrated the arrival of the migrants at his port city last week.

“The 1st bus has just arrived. Refugees from Syria and Yemen. They stayed outside in tents in Budel and Ter Apel,” Dales wrote on September 26.

“How good that they are now being taken care of in Velsen. We contribute to solving the national reception crisis. That’s how we do it here. I am proud of Velsen!”

Dutch politician Geert Wilders has been sharing videos on his own Twitter page and pointed to the fact that many Dutch people are struggling to make ends meet while migrants are enjoying free heating, housing, and meals on a cruise ship that many Dutch people could not afford even if it were available to them.

“Everything is free for asylum seekers. Nice hot food, heating, care. All for nothing on luxury cruise ships,” he wrote in another post.

“While our own people cannot pay their energy bills, and many elderly people are in diapers due to a lack of healthcare staff.”

Currently, the Netherlands is experiencing 17.1 percent inflation, and the country faces the same deindustrialization threat as neighboring Germany due to soaring energy costs, making the burden of the migrant crisis on the Dutch taxpayer enormous.

The videos also serve as a huge pull for migrants who have their eye on coming to Europe. The continent is already facing a significant crisis this year, with hundreds of thousands making their way to Europe and many of them determined to reach wealthier countries like Germany and the Netherlands.

“This government policy is insane, insane and sick. Our people get a crumb, strangers get everything.”

He also posted a video graphic that described how migrant smugglers operate and advertise their business.

“The asylum profiteers shamelessly show on TikTok how they cheat. By car, bus, and plane through four, five safe countries and then fly to Holland to seek asylum here and parasitize on 5-star cruise ships with our money,” he wrote.

Due to the current migrant crisis the Netherlands has faced over the years, last year the Dutch government mandated quotas to force municipalities to accept more migrants. An estimated 11,000 illegal migrants have entered the country this year, but the Netherlands already has an extremely large migrant population in a small and densely populated country, which has led to severe housing shortages both for Dutch citizens and immigrants.

The Netherlands is not the only country facing such challenges either. As reported by Remix News, migrants are being housed in some of the finest hotels and accommodations in Europe as a new migrant crisis develops. In the United Kingdom, people have seen their weddings cancelled with short notice after the government block-booked hotel rooms for migrants, a controversial policy that has been in place for years. The U.K. is currently spending over £5 million of taxpayer cash every day on accommodating asylum seekers and Afghan refugees in hotels, equating to £1.8 billion (€2.1 billion) every year. Migrants are often aware that countries turn hotels into refugee accommodations and have protested when they have not received such treatment.

Hungary has already seen over 160,000 migrants cross its border since the beginning of the year, and Germany is facing a refugee crisis that has led 12 of its 16 federal states to no longer accept new refugees and migrants.