How QT Broke The Market: As Tail Risk Has All But Disappeared, The Dow Jones is Now More Volatile Than Bitcoin 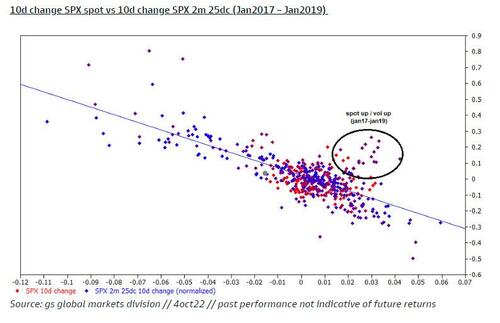 Something is breaking in the market, and it is not only making trading via options virtually impossible, it is also flipping legacy, post-QE trading patterns.

As one of Goldman’s top derivatives traders, Brian Garrett, wrote over the past few days, “for much of my career, if you would mentioned “spot vol correlation” in conversation, you lose would lose 95% of your audience by the third word… this was is until investors started to feel the impact to your convexity book’s performance … depending on the market regime, this dynamic can lead to periods of both large outperformance and large underperformance.“

Regime 1 (then): “spot up vol up” became part of the investing vernacular in 2017-2019. In the first chart below, you can see why – calls went bid as the market rallied, and owners saw both a delta and vol bloom in upside convexity.

Regime 2 (now):  in the last two years, a higher implied vol regime has manifested and the attractiveness of convexity has quickly diminished. For traders who are bullish, Garrett would recommend against buying outright call options as your carry will be quite difficult, and spot up vol up is (for now) a thing of the past (chart 2) 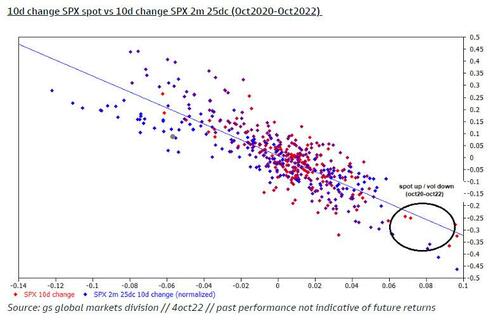 Garrett’s conclusion: “keep your index vega exposure in the right tail at a minimum for now, spot up vol down is here.”

Does this sound all too Greek (no pun intended) to you? Luckily, one of the financial all-time greats, Citigroup’s Matt King is out with a brief note (available to pro subs), putting the above arcane view into far more understandable terms: while the QE era suppressed day-to-day vol risk, it boosted tail risk; now, with QT, both trends have reversed.

As King puts it, “sharp spikes higher in vol, especially in rates, have been accompanied by widespread concern about illiquidity.” But in many ways King thinks of this “as part of a return to a more healthy, less unbalanced, market. QE saw day-to-day vol suppressed unnaturally, at the expense of increased tail risk and OTM skew.” i.e., this is what Garrett defined as “Regime 1.” Not surprisingly, to King, “QT means the opposite”, i.e. “Regime 2“

Obviously, the removal of the large, off-market, price-insensitive bid for risk courtesy of the Fed that resulted from QE has left a giant void beneath market prices, and to King, who has for much of the past 13 years been a tacit critic of how central banks have broken market, “it may take forced issuance or outflows to precipitate true price discovery.” However, until this point is reached, King,  like Hartnett and Wilson, finds it “hard to be bullish on risk. Indeed, just as QE almost forced investors to be short vol and long risk, so under QT there is a case your default position should be short risk and long vol.”

Going back to Garrett, the Goldman trader also had some ideas how to monetize this growing market discrepancy, starting with index trades…

… and then looking at single stock derivatives, where an especially interesting trade opportunity has opened up: 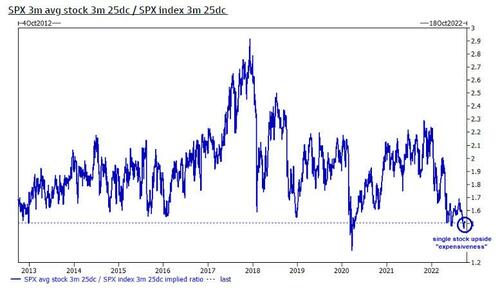 There is one more chart that the Goldman trader posted earlier last week that was quite stunning that: given the rally in yields (fwds higher) and the level of implied volatility, this is one of the first times in 20y that the 12 month 10% OTM put is funded by a call that is greater than 10% OTM (i.e, uneven risk reversals line up for costless and the vol market is daring you to sell the index call) 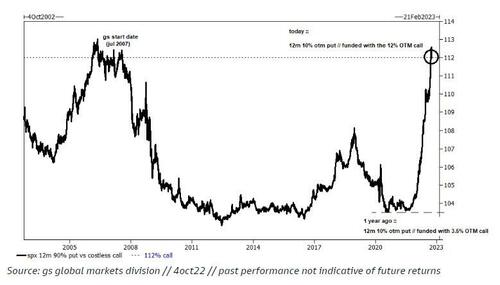 Fast forward a few days until after last week’s payrolls report, when we saw Garrett’s trade recos pan out very much as expected. As mentioned above, the hurdle for spx realized to pay is extremely high, and Friday’s “underperformance of convexity is one of the most severe we have seen since March of 2020”, or as Garrett puts it, “following up from earlier this week, just as you can’t own calls for a rally, it appears you also can’t own puts for a sell off.“ 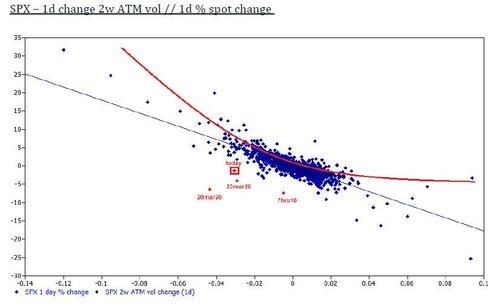 This broken derivatives market may explain why on Friday, Garrett noted that “the floor is extremely quiet despite an almost 4% (not a typo) sell off in NDX … cash 1 delta volumes are down 3% vs the 20d avg (our desk is almost 400bps better for sale, very much driven by asset managers) … option volumes are up small // mostly has been monetization and vol for sale (hence, the underperformance).”

Then again, as King explained above while tail risk has collapsed in the QT era, day-to-day vol risk has exploded, and as Garrett notes, “if it feels like rates are completely driving the equity bus, it’s because they are… SPX and 10y yield rolling correlation (50 day) has not been this negative in 20 years … truly does not feel like this is going to change, we have had seen spx down rates up trades printing.” 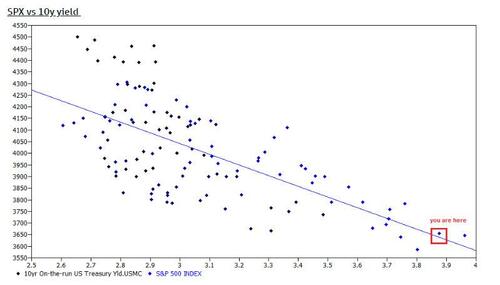 But the clearest visualization of just how broken (or is that unbroken) the market is now that QT is the dominant market force, look no further than what Garrett said is the “chart for the weekend” – “the dow jones (30 largest industrial stocks on planet earth) if officially more volatile than bitcoin.” 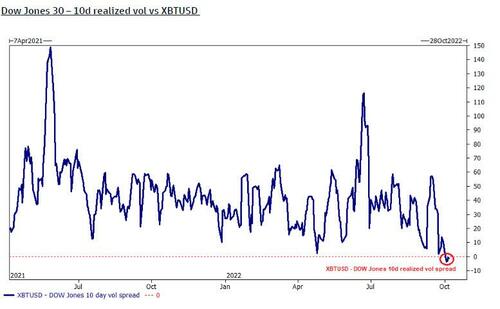 More in the full note available to pro subs in the usual place.