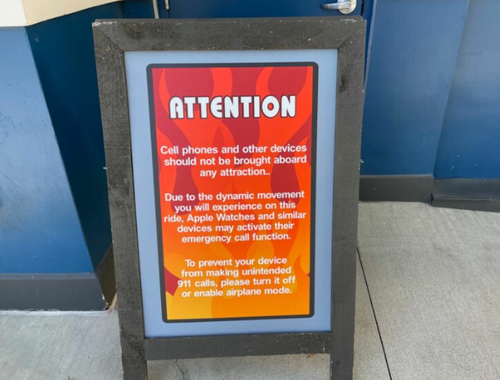 It has been reported Apple’s algorithm on newly released devices, which factors in G-force measurements, pressure changes, GPS/speed changes, and loud noises, has been tricked numerous times at the theme parks while the owner of the device was on a rollercoaster.

Stern provided one 911 call of a false positive while a person was on a rollercoaster at Kings Island amusement park just northeast of Cincinnati in Mason, Ohio.

Since the iPhone 14 went on sale, the 911 dispatch center near Kings Island amusement park has received at least six phones calls saying:

“The owner of this iPhone was in a severe car crash…”

Except, the owner was just on a roller coaster.

In the video, the iPhone revealed to the 911 emergency operator:

“The owner of this iPhone was in a severe car crash and is not responding to their phone.”

The phone’s owner wasn’t responsive because they were having a blast on the rollercoaster. Stern said the amusement park reported at least six recent car-crash detection false positives. This prompted local emergency teams to investigate each one for a car crash at the amusement park but found no evidence of a crash.

The theme park website Coaster101 reported that the same phenomenon was happening at the Dollywood amusement park in Tennessee. Rollercoaster rides now have signs that warn guests to leave Apple devices off the ride for fear “device may activate emergency call function.”

Cell phones and other devices should not be brought aboard any attraction.

Due to the dynamic movement you will experience on this ride, Apple Watches and similar devices may activate their emergency call function.

To prevent your device from making unintended 911 calls, please turn it off or enable airplane mode.

Apple Watch users, has this happened to you on a coaster? pic.twitter.com/GzfqnmjZ2J

Perhaps Apple engineers could solve this issue with a geofence update around all amusement parks. And why wasn’t this thought of in the first place?