Ford shares are off pre-market Monday morning as the automaker was downgraded to sell from neutral by UBS on weaker profit margins. General Motors shares are also slumping after being cut to neutral from buy on “demand destruction”.

Analyst Patrick Hummel from UBS wrote that Ford is “ranked behind Stellantis and General Motors when it comes to Ebit margins in North America” and that the company has the “highest risk of testing break-even points,” according to a Monday morning Bloomberg wrap-up of the analysis.

The note also said that Ford’s European segment could become loss making as a result of a tough macroeconomic backdrop. This backdrop could also work against the company’s new plans of restructuring, the note says.

UBS also says that the separation of the Model E from the legacy business at the end of 2022 – sometimes considered to be a value creating event – will instead turn out to be a “value-neutral event on a 12-month basis”.

Ford’s EV execution has been solid with a steep sales curve, but GM is likely to catch up fast in 2023 with its big Ultium-based product offensive and is better positioned to meet the IRA local content requirements near-term due to its lead in setting up local battery cell capacity. Ford also keeps lagging GM in AV/ADAS, in our view. In a nutshell, Ford has one of the least attractive risk/reward profiles amongst Western OEMs on a 12-month view, which is why we downgrade to Sell.

Hummel cut his price target from $13 to $10 because he believes that Ford has the “most stretched full-year guidance” out of all the OEMs.

He also noted that General Motors has a “strong launch pipeline” heading into 2023, but thinks that the outlook for the entire sector is “deteriorating so fast that demand destruction seems inevitable at a time when supply is improving.”

His note on General Motors is entitled “It Will Get Stormy In 2023”. Hummels writes:

We believe this will likely lead to a paradigm shift from under- to oversupply and consequently, a price & mix led drop in margins. We expect EPS to more than halve next year. Despite -40% negative share performance ytd, the rapidly deteriorating top-down picture makes it unlikely that GM’s strong EV story can drive shares higher with a 6-12m view. Trading on 10x PE 2023E (UBSe), investors are likely to remain on the sideline near-term. We downgrade to Neutral with a new $38 PT, but the relative preference over Ford remains.

Hummel says he does not see the Cruise business becoming a near-term value driver and he cuts his price target from $56 to $38:

We are cutting our estimates again for 2023 & 24 to reflect the price/mix headwinds and lower GMF earnings on lower residuals. We now forecast a 440bps decline y/y in EBIT-adj. margin for 2023E, and our EPS-adj. drops -54% y/y to $3.40. We see the EBIT-adj. in North America falling by $5.0bn y/y despite some commodity tailwinds, resulting in 6.0% EBIT-adj. margin. As a reminder, GMNA enjoyed a $18bn cumulative price/mix boost since Q1/20, ie, our forecasts don’t include a full reversal of the gains due to the structural changes made to the distribution model.

UBS’s analysis of Ford stands at odds with Morgan Stanley, who raised the name to “overweight” with a $14 price target just days ago.

The investment bank is betting on Ford’s ability to come out of the ICE to EV shift efficiently. Morgan Stanley said Ford “is a call on CEO Jim Farley’s ability to reposition the Ford portfolio and align the cultures and capital needs of the EV and ICE sides of the house.” 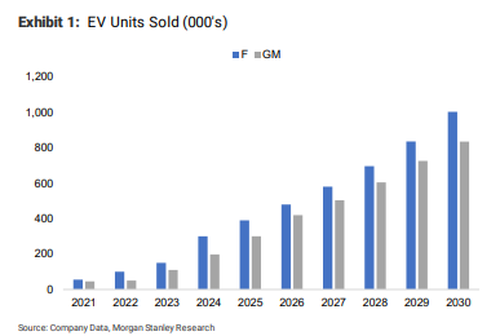 Morgan Stanley analyst Adam Jonas raised his recommendation on Ford to overweight from equal-weight, maintaining his $14 price target on the name.

The Ford upgrade was “based on valuation and [Jonas’] preference for Ford over equal-weight-rated General Motors, the opposite of UBS’s preference between the two names.