“It’s A Global Margin Call. I Hope We Survive” 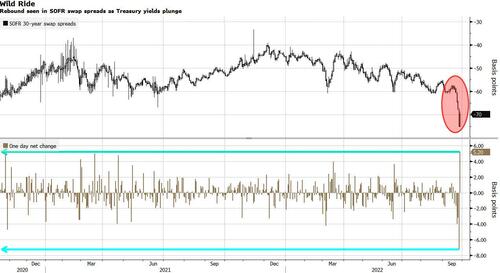 One week after former NY Fed guru Marc Cabana (who needs no introduction but in case someone is unfamiliar, please read this), warned that the Fed could follow in the BOE’s footsteps, as “the Fed wants to blindly pursue its quest to get inflation down but deteriorating market functioning or frozen credit could push them to intervene.” Then, Cabana – whose pre-crisis predictive track record is matched only by that of Zoltan Pozsar – explicitly warned that the next market to break will be the Treasury market or as he put it, “UST breakdown is a growing risk” to wit:

And while the devastation to the economy and markets would be unprecedented, the silver lining according to Cabana is that “an unanchored UST market may be fastest & most disruptive way to tighten conditions & lower inflation.” Then again, a broken Treasury market would have far more terrifying and catastrophic consequences than just “lower inflation” – it would destroy the US, and western economy, overnight. Which begs the question, which Cabana implicitly posed: does the Fed wants to slow the economy, or have it come to a crashing halt?

While Cabana’s warning – which will come true, it’s just a matter of time – has yet to manifest itself in a breach of the US Treasury market, it is effectively describing the slow-motion collapse in the European government bond market to a T.

Picking up on what we observed two weeks ago when we noted the dislocation in US SOFR swap spreads, which just experienced the largest one-day moves in either direction on record for the index, which was rolled out in October 2020….

… Goldman writes a key measure of German market risk – the spread between German government bonds (Bunds) and interest rate swap agreements – jumped above the previous record set in 2008. At the same time, the cost of hedging German government debt with interest-rate options, or option-implied volatility, meanwhile rose to the highest level on record.

And, as we reported two weeks ago, that left UK institutions facing a tsunami of margin calls that they could meet only by liquidating assets. That in turn led to a run on the UK government bond market, followed closely by the rest of European bond markets. The Bank of England’s emergency bond-buying delayed a market crash, but the UK gilts market remains on a knife edge, with option hedging costs at an all-time high. 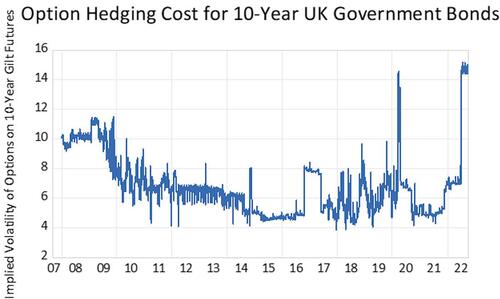 Goldman then quotes a portfolio manager at one of Germany’s largest insurance companies who summarized recent events: “It’s a global margin call. I hope we survive”… or precisely what we warned would happen just a few weeks ago.

BBG dollar index 1300, back over covid panic highs, and new record as dollar margin call sweeps emerging markets. Pivot will not come from "inflation target is hit" but from devastation across ROW pic.twitter.com/C3h15bko0B

Since then it’s gotten from bad to worse as weaker European banks suddenly have trouble finding short-term funding, or at least that’s what the market thinks, in the process sending the cost of Credit Suisse CDS higher than it was in 2008, at nearly 400 basis points (4 percentage points) above the cost of interbank funding, prompting even more questions about European bond market stability and speculation that the ECB will be the next to capitulate and bail out markets.

What about the US?

So far, American pension funds and insurers haven’t faced the same kind of margin calls, but they stand to suffer painful losses. As interest rates fell, they shifted to real income-earning assets like commercial real estate. The value of commercial real estate investment companies on the US stock market has fallen by 35%, about the same amount as the Nasdaq.

If that’s any indication, the $20 trillion value of the commercial real estate market has lost about $7 trillion this year, in addition to losses of nearly 20% on corporate bond and stock portfolios. Stocks and bonds, the largest components of pension portfolios, are down about 20% during 2022. All in – depending on which survey of pension fund asset allocation you believe – the average US pension has probably lost more than 20% of its asset value this year.

Indeed, pensions don’t even need to have a near-death experience like in the UK: if the value of underlying assets drops enough, the forced selling will begin sooner or later.  And once the capitulation really kicks in – as even formerly bullish Goldman strategists warn – followed closely by mass layoffs, only then will we find just how determined Powell is to pull a Volcker 2.0 and blow up the US economy and markets before he is fired by the president as his parting gift for unleashing the worst recession since the global financial crisis.