“No Possibility Of Reconciliation” Any Longer: US And China Are Now “Officially In An Economic War” 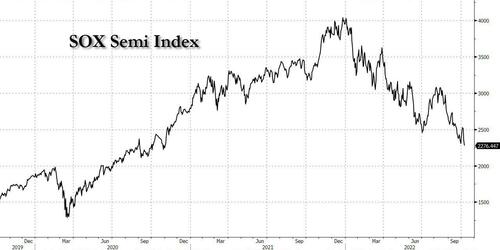 Semiconductor stocks across the globe – in Hong Kong, Europe and certainly in the US – are tumbling after the Biden administration on Friday unveiled new restrictions on technology exports to China which are meant to undercut Beijing’s ability to develop wide swaths of its economy, from semiconductors and supercomputers to surveillance systems and advanced weapons.

As noted earlier, the US Commerce Department on Friday unveiled sweeping new regulations that limit the sale of semiconductors and chip-making equipment to Chinese customers, striking at the foundation of the country’s efforts to build its own chip industry. The agency also added 31 organizations to its unverified list, including Yangtze Memory Technologies and a subsidiary of leading chip equipment maker Naura Technology, severely limiting their ability to buy technology from abroad.

The move is the Biden admin’s most aggressive yet as it tries to stop China from developing technological capabilities it sees as a threat. And, as Bloomberg notes, depending on how broadly Washington enforces the restrictions, the impact could extend well beyond semiconductors and into industries that rely on high-end computing, from electric vehicles and aerospace to simple gadgets like smartphones.

The two countries are now officially in an “economic war,” Dylan Patel, chief analyst at SemiAnalysis, said. A Chinese analyst said there is “no possibility of reconciliation” any longer.

Chinese state media and officials over the weekend raged against the action, warning of economic consequences and stirring speculation about potential retaliation. He Xiaopeng, chairman and CEO of Chinese EV maker Xpeng, warned last month that escalating US restrictions on chip exports will set back the nation’s autonomous driving sector.

“This is the US salvo against China’s efforts to build its domestic tech capabilities,” said Patel, who estimates the restrictions could reduce global technology and industry trade by hundreds of billions of dollars. “It’s the US firing back, making clear they will fight back.”

European and Chinese semiconductor stocks tumbled on the news. ASML Holding NV, the most advanced maker of equipment for producing semiconductors, fell more than 3%. Bellwether Semiconductor Manufacturing International Corp. fell as much as 5.2% in Hong Kong on Monday, the most since Aug. 15, as Bloomberg Intelligence analyst Charles Shum slashed his estimate on 2023 growth by 50%. Hua Hong Semiconductor Ltd. plunged 10%, while Shanghai Fudan Microelectronics Group Co. plummeted 25%. Naura fell by its daily limit of 10% in mainland China, the biggest fall since April.

According to Dan Wang, technology analyst at Gavekal Dragonomics, “the rules are a directional signal about US policy on China: a very hawkish consensus is now cemented in place.”

US officials said the new restrictions are necessary to stop China from becoming more of an economic and military menace. As a reminder, it was back in 2018 when we first explained that the “trade” war with China was really all about chips and semiconductors, preventing China from overtaking the US before it’s too late. They are seeking to ensure the country’s chipmakers don’t secure the capability to make advanced semiconductors.

China “has poured resources into developing supercomputing capabilities and seeks to become a world leader in artificial intelligence by 2030,” said Assistant Secretary of Commerce for Export Administration Thea D. Rozman Kendler. “It is using these capabilities to monitor, track and surveil their own citizens, and fuel its military modernization.”

Reaction in China was furious. The nationalistic Global Times newspaper warned the “savage attack on free trade” would have dire consequences for the US.

“Only arrogant and ignorant people can truly believe that the US can block the development of China’s semiconductor or other technology industries by these illegitimate means,” it said in an editorial. “The US hegemony in science and technology that harms others without benefiting itself may bring some short-term difficulties to China’s semiconductor industry, but will in turn strengthen China’s will and ability to stand on its own in science and technology.”

Quoted by Bloomberg, China’s Foreign Ministry spokesperson Mao Ning said the measures are unfair and will “deal a blow to global industrial and supply chains and world economic recovery.”

“The reality is the US is determined to use chips as a tool to contain China,” Gu Wenjun, head of Chinese chip researcher ICwise, wrote in an online commentary. “There is no possibility of reconciliation.”

The new US regulations broadly limit chipmakers from selling to China artificial intelligence semiconductors and those that can be used for supercomputers. Nvidia Corp. warned in September that government restrictions on exporting AI chips to China could affect hundreds of millions of dollars in revenue, sending its stock tumbling. Chipmakers can request a Commerce Department exception to those rules. But they should presume such requests will be denied, senior officials said.

Commerce also put in place a raft of restrictions on supplying US machinery that’s capable of making advanced semiconductors. It’s targeting the types of memory and logic chips that are at the heart of state-of-the-art designs.

Specifically, the restrictions cover production of logic chips using so-called nonplanar transistors made with 16-nanometer technology or anything more advanced than that, 18-nanometer dynamic random access memory chips and Nand-style flash memory chips with 128 layers or more (the smaller the number of nanometers, the more capable the chip).

Stacy Rasgon and a team from Sanford C. Bernstein explained the restrictions on AI, supercomputers and advanced chip-making equipment, while pointing out that the standard CPUs used in personal computers and servers would not be blocked from export to China, as some had feared.

“The changes represent a further escalation, and we do not know what China might do in response,” the Bernstein analysts wrote. “Potential retaliation remains a risk.”

Well there is always an invasion or blockade of Taiwan, just as Biden is doing his best to drain the “emergency” petroleum reserve to win a few Democratic votes.

Finally, as Bloomberg notes, one key question is how the US rules will affect the ability of companies like ASML to sell into China. The Dutch company is effectively the most important supply chain company for chipmakers around the world.

ASML has had to strike a challenging balance between the US and China. It has been selling its deep ultraviolet, or DUV, machines to Chinese customers, but has held back from selling its more advanced extreme ultraviolet, or EUV, machines. Under the new Commerce Department restrictions, the company may be limited from selling DUV technology to Chinese customers too, Citigroup analysts wrote.

“We are assessing the potential implications of the new regulations, if any, and cannot comment at this moment,” said Monique Mols, a spokesperson for ASML.

According to Patel of SemiAnalysis, the unverified list is a serious threat to China’s tech ambitions. In the past, the Commerce Department cut off access to critical technologies for companies like Huawei when they were added to the so-called entity list, meaning the agency had gathered evidence against them. The unverified list simply means the Commerce Department can’t verify that a company’s activities are safe.

“That is huge,” he said. “They can pretty much blacklist any company they want in China within two months.”

Here are some more kneejerk reactions from Wall Street analysts, courtesy of Bloomberg: