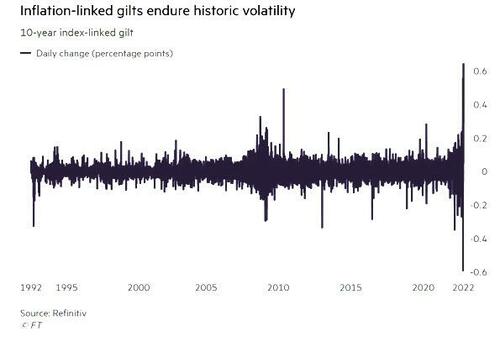 Last week we cautioned readers that the market “calm” was set to end this coming Friday when the BOE’s bond buying program was coming to an end, while making it clear that there would be no actual end as the Bank of England is by now completely trapped, and any end to QE would spark a crash, and if anything the central bank would do more not less.

Well, just two days later we found out just how trapped the BOE has become, when early on Tuesday morning the Bank of England announced that it would widen the scope of its daily gilt purchase operations – boosting not shrinking the moral hazard that got us here – to include purchases of index-linked gilts – technically, it said it would “temporarily absorb selling of index-linked gilts in excess of market intermediation capacity” – as “a further backstop to restore orderly market conditions”, following yesterday’s epic bond rout which shouldn’t have happened, and yet it did.

The central bank, whose purchases have dried up as nobody actually wants to sell to it as long as it is in the market but the moment it steps away there is an insta-crisis, said it was prepared to buy up to £5bn a day in index-linked UK government bonds as it warned of “dysfunction” in the gilt market. Its new intervention marks the first time it has purchased index-linked debt as part of its bond-buying schemes.

The latest measures, which were announced just before the opening of markets in London, came just a day after the BoE unveiled a new short-term funding program that it hoped would act as a pressure release valve for pension schemes that have been caught up in a vicious circle after chancellor Kwasi Kwarteng’s September 23 “mini” Budget set off a historic sell-off in gilts.

“Two interventions in 24 hours is pretty extraordinary,” said Sandra Holdsworth, UK head of rates at Aegon Asset Management, adding that the BoE’s steps showed how the problem in the pension industry was “much bigger than anyone thought a week ago.”

As we noted yesterday, the BoE’s emergency bond-buying scheme, which was launched on September 28, initially helped soothe jittery markets but selling picked up strongly on Monday when the US bond market was closed as analysts and investors worried about the program’s looming end date on Friday, just as we warned it would.

“The beginning of this week has seen a further significant repricing of UK government debt, particularly index-linked gilts. Dysfunction in this market, and the prospect of self-reinforcing ‘fire sale’ dynamics, pose a material risk to UK financial stability,” the bank said.

Inflation-linked gilts, which according to the FT is a market dominated by defined benefit pension schemes, came under particularly acute selling pressure on Monday. The 10-year yield had surged 0.64 percentage points to 1.24%, the biggest rise since at least 1992. Monday’s sell-off set a gloomy tone ahead of a £900mn 30-year inflation-linked gilt sale by the Debt Management Office due to take place on Tuesday.

Following the BoE’s intervention, the sale attracted solid demand, but the DMO paid the highest inflation-adjusted borrowing cost for any debt since 2008, with the bond pricing at a real yield of 1.55 per cent. Markets were steadier on Tuesday with the 10-year inflation-linked gilt yield falling back by 0.16 percentage points. 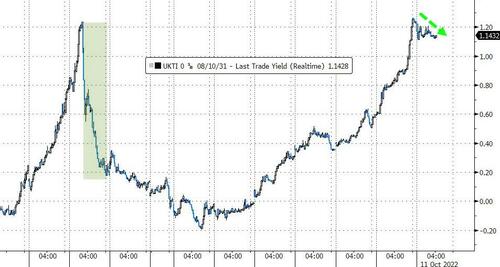 On Monday, conventional gilts also sustained a fresh bout of selling pressure that brought 30-year government borrowing costs to the highest level since the BoE announced its bond-purchasing scheme in September. Separately, the BoE on Monday increased the limit on its daily bond purchases to £10bn, from £5bn previously. It kept that overall cap intact on Tuesday, but said it would buy as much as £5bn a day in conventional gilts and £5bn in index-linked gilts until the programme expires on Friday. Ironically, so far the central bank has only used a small portion of the total £65bn that it has allotted to bond buying; of course that will change the moment the bank steps away from the bid sparking an avalanche of selling.

The yield on 10-year inflation-linked securities dropped as much as 12 basis points after the BOE announcement, while a sale of £900 million of inflation-linked 30-year bonds from the government then saw strong investor appetite. Conventional debt initially also rallied, before paring gains, showing sentiment is still fragile.

While the BOE has stressed that it’ll stop a disorderly market from threatening the UK’s financial stability, investors warn the repeated interventions are coming at a cost of the central bank’s credibility. In the view of strategists, there’s little that the central bank can do to repair investor confidence shattered by government U-turns and risky policy.

“The policy of consistently acting at the last minute without putting a more credible long-term plan in place is unnerving for markets.”

“The root cause of the problem is that investor confidence in UK Plc has been shaken and the BOE is attempting to mask the symptoms of that given it can do nothing to address the cause,” said Richard McGuire, head of rates strategy at Rabobank.

What Antoine may not get, however, is that there is no “credible long-term plan” when one tries to pull the monetary heroin to a market that is overly addicted, without sending the patient into a come. And the sooner markets realize just how trapped central banks truly are – something Bank of America’s Marc Cabana touched upon recently in ‘”Treasury Market Breakdown Is At Risk” – the faster we can get back to the zombie economy new normal that can’t possibly change without the much-anticipated great reset.