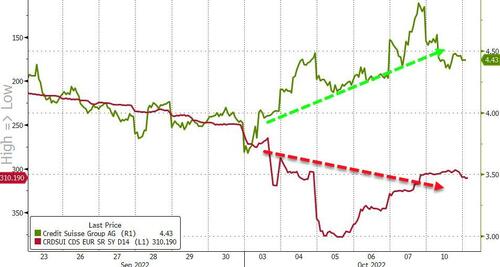 The last week has seen Credit Suisse’s stock price rallying despite an ongoing increase in the market’s perception of the embattled bank’s credit risk.

However, after a Goldman Sachs report overnight assessing CS’ strategic options, share prices are sliding back down towards credit’s reality… 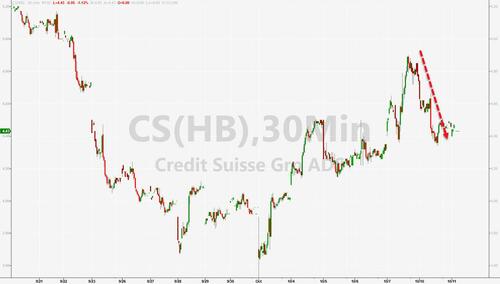 “Credit Suisse continues to face cyclical and structural challenges,” Goldman analysts wrote in a note, maintaining a sell recommendation on the stock.

Disposals may provide some relief, but sector P/B multiples are at depressed levels: we estimate a sale of Securitized Products could improve 2023/24E CET1% by 30-33bps. Overall, we estimate a potential capital shortfall of CHF4-8bn in 2024 when analysing CS’ capital position given various CET1 targets and litigation/restructuring costs, and in our base case (no restructuring), 2024E CET1 excess falls to CHF3bn.

Given our view that the IB requires restructuring while capital generation is minimal, we now view an equity raise as prudent to preserve a buffer.

Goldman’s comments were echoed by Jefferies analyst Flora Bocahut, who said in a note on Tuesday that Credit Suisse needs to build about 9 billion Swiss francs of capital in the next two-to-three years.

But given the dilutive nature of a capital increase, Bocahut expects it to prioritize asset disposals, she wrote in a note.

Bloomberg News reported Friday that bidders are lining up for the bank’s securitized products unit, a key pillar in the downsizing of its investment banking operations.

Given market conditions and the fact that Credit Suisse is a “forced seller at the moment,” Vontobel analyst Andreas Venditti is “pretty sure they’re not going to get the highest bids one would wish for in this environment,” he said by phone.

The sale process, which is far advanced, has drawn interest from Pimco, Sixth Street and an investor group including Centerbridge Partners.

As the bank tries to avoid what would be an expensive capital raising, it is also exploring the sale of the Mandarin Oriental Savoy Zurich, Bloomberg News reported last week.