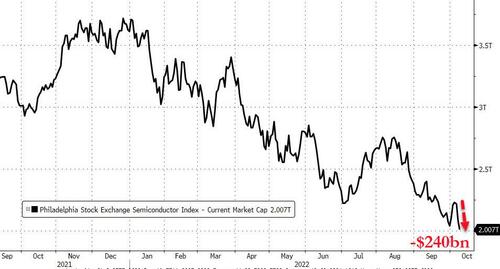 Global semiconductor stocks were monkey-hammered Tuesday in a worsening US-China tech war. The acceleration of the chip rout has wiped out a whopping $240 billion from the sector’s global market value since Thursday, according to Bloomberg data. In total, Global semi stocks have lost over $1.7 trillion in market cap from their Dec 2021 highs…

Taiwan Semiconductor Manufacturing Co., the world’s largest chipmaker, plunged as much as 8.5% in Asia (a record), while Samsung Electronics and Tokyo Electron also extended declines.

The downward draft in global semis comes after the Biden administration slapped China last Friday with US export restrictions on certain types of chips used in artificial intelligence and supercomputing. Tighter rules were also enforced on US companies selling semiconductor equipment to Chinese firms.

“The changes represent a further escalation, and we do not know what China might do in response,” wrote Stacy Rasgon, an analyst at Bernstein. “Potential retaliation remains a risk.”

Gabriel Wildau, an analyst at advisory firm Teneo Holdings, said the new restrictions might only suggest the Biden administration is buying some time to limit China’s advancement of chips while allowing the US to catch up.

In the US, chip stocks are on track for the third day of declines, with Advanced Micro Devices Inc., Nvidia Corp., Qualcomm Inc., and Texas Instruments Inc. down about 1%. The benchmark Philadelphia Semiconductor is down 42% this year and on track for the worst annual performance in 14 years as the PC and crypto booms turn to busts. Earnings estimates downgrades have also accelerated (one of the fastest declines since 2008) and will likely continue for the next few quarters. 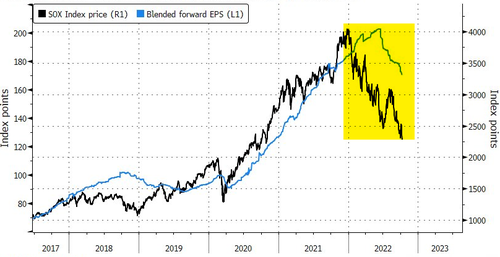 SOX is priced around 13.3 times estimated earnings, nearing a low of 11.3 in 2018. Earnings could be slashed in the coming quarters as a glut of memory chips and graphics cards need to be offloaded at heavily discounted prices. Samsung, Micron, and AMD have all warned about excess inventory… 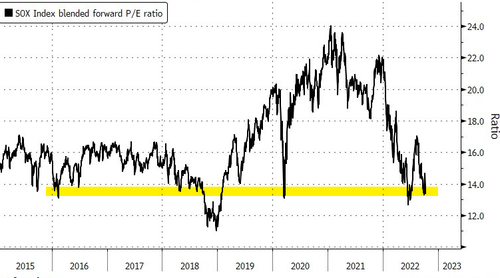 Christopher Danely, an analyst at Citigroup, had a pretty ominous view about semis, indicating, “this is just the beginning of the downturn and every company/every end market will feel it.”

October has been the worst month for global tech since October 2008. 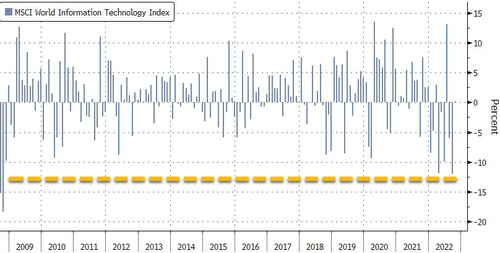 “It is difficult to call a bottom on the performance of the chip sector,” said Gary Dugan, chief executive officer of the Global CIO Office.