Peloton Interactive, Inc. shares have crashed 75% this year, and while turmoil rocked the company, the former chief executive borrowed a bunch of money against stock he owned and was slapped with repeated margin calls from Goldman Sachs, according to WSJ, citing a person familiar with the matter.

John Foley, the co-founder and former CEO, was asked by Goldman Sachs to provide additional funds or collateral for personal loans he took out on his stock when share prices were elevated during the virus pandemic. Since peaking at $160 in December 2020, shares have plunged 95%.

Here are some of Foley’s sales, most notably, selling on the peaks.

Foley told WSJ resigning from the board gave him the ability to pledge more Peloton shares — but said the resignation wasn’t behind satisfying margin calls:

“I didn’t resign from the board because I was underwater … to the extent that I took on debt through Goldman, it was because I am bullish on Peloton and still am. It was and is a great company.”

SEC filing show Foley pledged about 20% of this stake or about 3.5 million Peloton shares at the end of Sept. 2021. Those shares were worth $300 million a year ago and are now worth around $30 million.

The people said Foley secured private financing to prevent stock sales by Goldman. He refused to answer the question of how much of his stake has been pledged or even how much he borrowed against his holdings.

WSJ noted his board seat with the company that takes an iPad and slaps it on a fancy exercise bike came with limitations:

His seat on the board limited his ability to raise additional funds because most public companies prohibit directors and executives from selling their shares during certain trading periods. In addition, Peloton’s policy limits pledges for margin loans by directors or executives to 40% of the value of an individual’s shares or vested options.

Foley left the board on Sept. 12 when shares in the company fell to $8.69 and eventually tumbled to a $6 handle by early October but have since rebounded to a $9 handle. He was a billionaire last year, with his stake worth $1.5 billion, and now he’s worth less than $100 million. 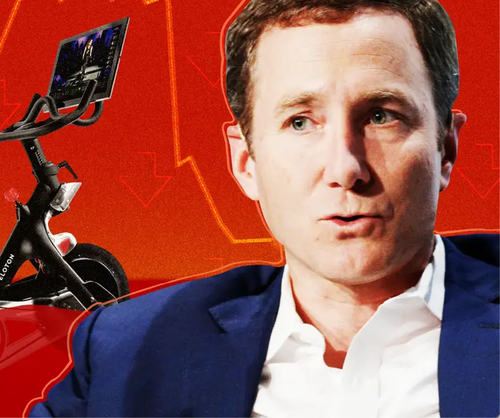 “Everyone can see I had a rocky year,” he said. “This was not a fun personal balance-sheet reset.”