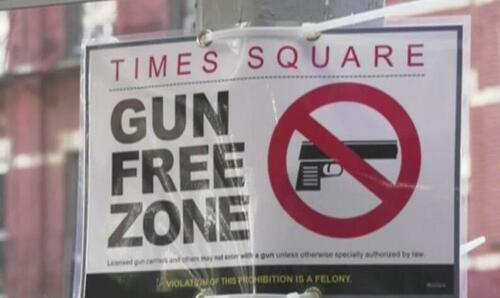 The first of the bills helps to track data from illegal gun trafficking within New York City.

Bloomberg said, “James filed a motion with the 2nd US Circuit Court of Appeals to stay the lower-court decision that found it was unconstitutional to ban firearms from Times Square, public transportation, bars, sports stadiums, and other public places. Such a stay would remain in effect while the state formally appeals the ruling.”

Stephen Louis, legal counsel at the New York City Law Department, said the “Attorney General has begun the appeal process to the second circuit and until they make some further determination, we will continue to enforce the law.”

As of Tuesday morning, signs in Times Square read this area is a “Gun Free Zone.”

Adams’ push to label certain public areas as gun-free zones came after the landmark 6-3 Supreme Court ruling this summer that changed New York from a may-issue state to a shall-issue state. In response to the ruling, anti-gun progressives unleashed sweeping measures to limit where law-abiding citizens couldn’t carry concealed firearms.