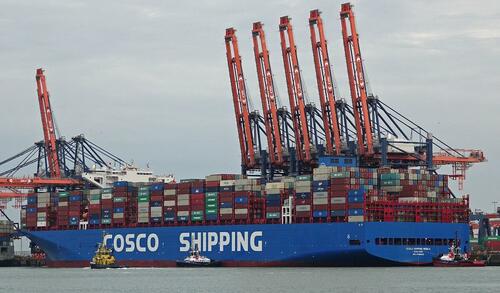 The problem with price inflation is that it often makes it impossible to track the true health of consumer demand.  For example, in August of this year Walmart reported a jump is overall sales, but also a decline in profits.  How is this possible?  Spiking inflation in most goods means people have to pay more for the same amount of stuff they usually buy.  But, Walmart also has to deal with higher wholesale prices and declining customer purchases as people start to make cuts to their retail budgets.

In other words, inflation makes it seem like sales are increasing when in reality profits are plummeting.

Another way to track actual retail performance without price inflation obscuring reality is to examine shipping volume and shipping rates.  In the summer, import volumes to the US began dropping off a cliff, indicating that consumer demand was indeed being affected by inflation/stagflation.  Now, trans-pacific shipping rates have also plunged at least 75%.  Shipping companies are reporting that empty cargo containers are becoming frequent in freight to the US, with companies scrambling to adjust after two years of boats overflowing with goods.

One thing that is important to note is that this process has been ongoing and has very little to do with the Federal Reserve’s rate hike program.  It is a separate issue tied directly to price inflation and Fed rate hikes have been ineffective in dealing with this problem.

Another issue that needs to be addressed is that prices are still high.  Faltering consumer demand is not dragging inflation back down to Earth as many economists expect, and this is a direct consequence of a stagflationary environment rather than a purely deflationary one.  Prices on many goods (necessities in particular) stay high or continue to climb while demand falls.  This is caused by high costs in raw materials, manufacturing and wages translating over to high prices in wholesale.  Retailers cannot lower prices much despite falling demand because profit margins are so thin.

The huge decline in volumes and shipping rates signal an important shift in the US economy and are a warning of changes to come.  Most importantly, the drop indicates that the $8 trillion in covid stimulus money that was helicopter dropped on the public in 2020 and 2021 is now gone, or at least, the effects are finally ending.  But what does this mean?

First, it means job demand is going to explode.  The millions of workers that were happy to live off of unemployment, covid welfare and their parents rather than participate in the economy are now going to be searching for work.  And, for now, there are plenty of empty job positions for them to fill.  This means a continuing jump in employment as job availability sees declines.

However, with profits slumping and demand falling the US will then see actual job losses and mass layoffs.  Stagflation will continue to hold until unemployment hits a level that affects manufacturing and costs in raw materials.  This will likely take some time.

The point is, the economy is not going to behave within the traditionally accepted mechanics.  We are not dealing with a standard inflationary crisis or a standard deflationary crisis.  There are elements of both at play, and the instability is much worse than was witnessed during the stagflationary event of the 1970s.

The US is now entering a stage of implosion in demand, inevitably followed by rising unemployment.