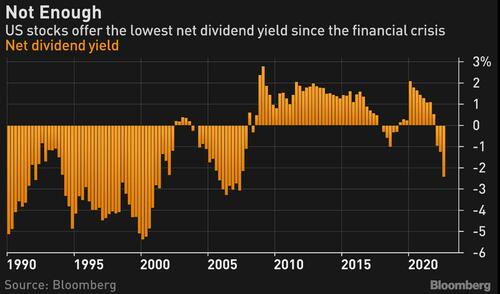 A warning bell that was heard before the financial crisis is ringing again on Wall Street: dividends on US stocks adjusted for the safest yields investors can buy are the most negative in years.

The dividend yield on the S&P 500 Index is a negative 240 basis points after adjusting for two-year Treasury rates, suggesting that there isn’t a persuasive case to invest in stocks just yet.  That is eerily similar to the situation that prevailed in 2006 and 2007, before stocks slumped 38% the following year.

While it may be tempting to attribute the plunge in stocks that we saw in 2008 to the impact of the financial crisis, history suggests that the anemic performance of the S&P wasn’t a one-off occurrence. Stocks were similarly pricey in 1992 and continually from 1994 through 2001, and the table below captures the subsequent period returns of both stocks and Treasuries: 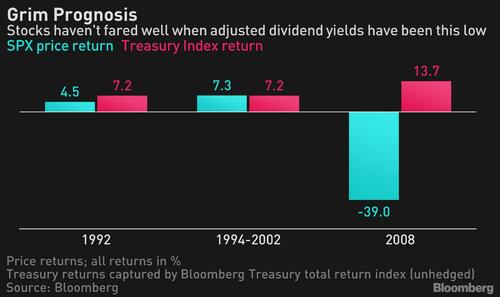 A recent analysis that looked at equities as lesser-rated quasi debt securities suggested that the S&P 500 may tumble to as low as 2,934 and the Nasdaq 100 to 9,208 if the markets are right in their assessment of how much more tightening is required from the Fed in the current policy cycle.

If the history of previous tightening cycles is anything to go by, the Fed has, on average, only been able to stop raising rates when its inflation-adjusted policy rate reached a full 200 basis points, compared with a level of minus 145 basis points now.

If that proves right again, stocks may yet tumble despite the considerable 24% slump we have already seen this year.

With the Fed’s benchmark rate expected to climb to levels not seen in years, stock investors should perhaps calibrate their expectations of returns. That may be a sobering prognosis for traders used to compelling returns in the go-go years following the financial crisis, when benchmark rates were hardly punitive and spawned a flight to equities.

The surge in long-dated Treasury yields this year has profound implications for investors’ equity risk premium. In a world where the 10-year yield is around 4%, an estimated earnings yield of about 6% on the S&P is hardly anything to shout about.

Is there a possibility that equities can escape the yoke of history? Much will depend on the Fed’s ability to engineer a soft landing of the economy. Specifically, it will mean that the current market pricing of a terminal rate of around 4.65% is right, meaning inflation will be contained, thus obviating the need for an even stiffer Fed funds rate. The US economy will also need to avert a recession for stocks to not take another significant leg down.

All told, while the correction in stocks seems brutal, there may be considerably more to come. As JPMorgan Chase & Co’s Jamie Dimon remarked, the S&P 500 “may have a ways to go” in its decline, and “it could be another easy 20%”