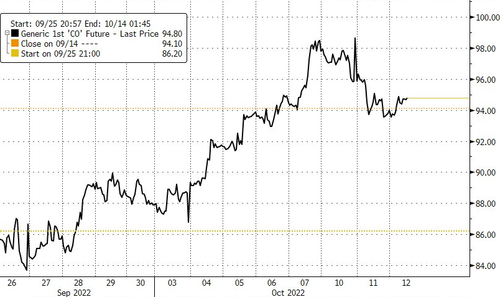 Here’s a summary of the Druzhba pipeline leak via Newsquawk:

Polish pipeline operator said on Tuesday evening it detected a leak in the Druzhba pipeline; cause is unknown; leak detected in one of two lines, second line is working as normal. Russia’s Transfneft said it has received notice from Polish operator PERN about the leak at Druzbha; oil pumping towards Poland continues, according to IFX. Polish top official for energy infrastructure said there are no grounds to believe leak in Druzhba pipeline was sabotage, adds leak was probably caused by accidental damage. Germany State of Brandenburg Economy Minister said there was a pressure drop in Druzhba’s main pipeline No.2, according to dpa. Polish pipeline operator PERN said supply to German clients is continuing taking into account technical possibilities; Polish refineries are receiving oil in line with nominations.

Brent crude is up about half a percent after the news. Prices increased in recent weeks, inching closer to $100 a barrel after OPEC+ production cut announcements.

A major pipeline carrying crude oil from Russia to Germany was halted after a leak was discovered as Europe grapples with energy infrastructure issues in recent weeks.

The leak was detected on a section of the Druzhba pipeline, Europe’s largest crude oil conduit. Bloomberg said Polish operator PERN stopped flows through one of the pipeline’s northern sections. It said the leak was discovered near the village of Zurawice, about 112 miles west of Warsaw in central Poland.

“The cause of the incident is not known for the moment. Pumping in the affected line was immediately stopped. Line 2 of the pipeline is functioning normally,” PERN said. 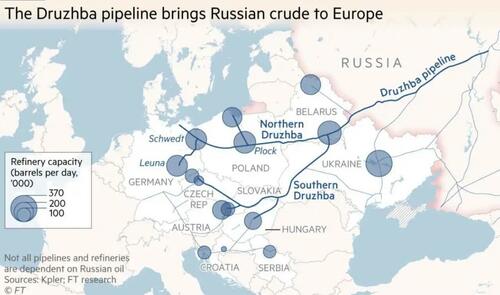 “At this point, all PERN services (technical, operational, in-house fire brigade and environmental protection) are taking action in accordance with the algorithms provided for this type of situation,” the operator said.

Local Polish news outlet PAP quoted PERN spokeswoman Katarzyna Krasinska who said Druzhba was supplying two refineries in Germany, one in Schwedt and the other in Spergau.

So far, no disruptions have been reported at the refineries. The refinery in Schwedt supplies 90% of Berlin’s fuel. Any disruptions could lead to fuel shortages across parts of Europe’s largest economy. Reuters data shows Druzhba had flows of 490,000 barrels daily of Russian Urals oil to Europe before the leak.

The Druzhba pipeline leak comes weeks after Russia’s Nord Stream pipelines underneath the Baltic Sea were blown up in an act of sabotage. German and EU leaders have accused Russia of sabotaging Nord Stream.

This past weekend, someone severed cables that brought a major train network in northern Germany to a screeching halt for hours.

Suddenly, critical infrastructure ‘accidents’ and/or sabotages appear to be increasing around Europe. Countries are racing to secure energy assets ahead of winter.