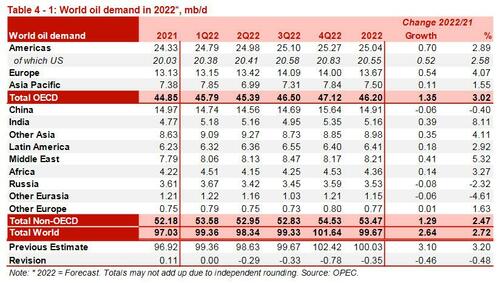 As expected, OPEC aggressively slashed projections for both global demand and the amount of crude it will need to pump this quarter, making the case for the output cut announced last week which sent shockwaves across the Biden administration.

Similarly, OPEC also slashed its oil demand growth forecast for 2023, by 360,000 bpd, expecting growth at 2.3 million bpd next year. Demand growth would be “subject to headwinds given the uncertainty that surrounds the global economic outlook and factors related to the pandemic,” OPEC said.

“Risks are skewed to the downside, with slowing growth in the global economy,” OPEC’s Vienna-based research department said in the report. Combined with “a possible resurgence of Covid restrictions in China and elsewhere,” the oil market may miss out on the typical seasonal uptick in consumption, it piled on to justify its output cut.

Separately, output from OPEC’s 13 members rose by 146,000 barrels a day to 29.77 million a day in September as they implemented a symbolic hike announced after Biden’s visit to the kingdom this summer, according to the report. Still, most members fell significantly short of their production targets as they wrestle with under-investment and operational disruptions.

The downgrade to consumption, which may well have been simply goalseeked to justify the output cut in light of the raging response from the White House, gives further insight into the motivations for the substantial 2 million barrel-a-day supply cut agreed by Saudi Arabia and its allies on Oct. 5, a move that provoked fierce criticism from President Joe Biden and other US officials.

Despite insistence from Russia and all of OPEC+ that the production cut was based on technical market assessments and is aimed at “stability,” many analysts, as well as the White House, saw the move as a political one.

“Looking ahead, and despite the usual seasonal hike in oil demand for heating, the challenges presented by the heightened levels of uncertainty, the slowing economic growth and a possible resurgence of COVID restrictions in China and elsewhere are expected to impact oil demand in 2022 and 2023,” the cartel said. OPEC also noted that last week’s decision of OPEC+ to cut 2 million bpd off its target production level was a pre-emptive and pro-active move “in an ongoing and relentless effort to provide a sustainable stability to the market.”

Saudi Energy Minister Prince Abdulaziz bin Salman cited a “variety of convoluted uncertainties” last week for the OPEC production cutback, as several institutions have downgraded their forecasts for economic growth; however as the WSJ report, ultimately it was just to snub the Biden admin and defy its threats, humiliating it on the global arena.

The International Monetary Fund warned on Tuesday that the worst of the current turmoil “is yet to come.” Oil prices slumped 23% in the third quarter, their worst rout in more than two years, putting OPEC nations’ revenue at risk.

Still, the demand revision from OPEC is eclipsed by the size of the cut announced by the coalition. Even if implemented only partially, it will bring OPEC output considerably below the average of 29.43 million barrels a day of crude the group believes it needs to supply in the fourth quarter.

President Biden slammed the Saudis’ decision, saying it bolsters oil revenues for Russia — a key member of the OPEC+ alliance — while Moscow wages war on Ukraine. He said the US needs to re-evaluate its relationship with the kingdom, though didn’t specify particular measures.