Rent Inflation Hits Outer-Ring Suburbs The Most, Core-Cities The Least 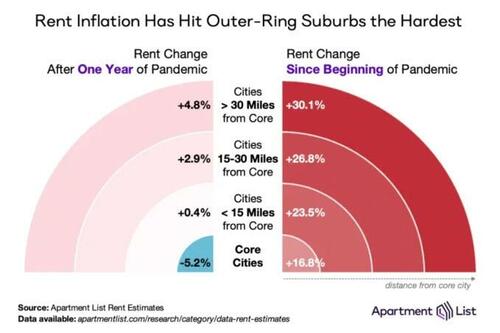 The impact of work-from-home arrangements is clearly visible in rental preferences. City crime is likely another “get me out of here” factor…

In the earliest phases of the pandemic, many of the nation’s large cities saw sharp rent declines as a subset of renters with newly remote working arrangements moved away from expensive downtown areas that had temporarily lost their vibrancy, in search of more space in the surrounding suburbs. At the same time, widespread job losses also forced many workers to give up leases they could no longer afford. In the time since, big city rent prices have bounced back as employment has rebounded and return to work plans have begun to materialize. But it’s still the suburbs that have continued to see the fastest rent growth.

Analyzing our rent estimates across 39 large and medium-sized metropolitan areas, we find that since March 2020, rents in the suburbs of these metros have grown by 27.2 percent, on average, substantially outpacing the 19.8 percent average rent growth in the core cities that they surround. 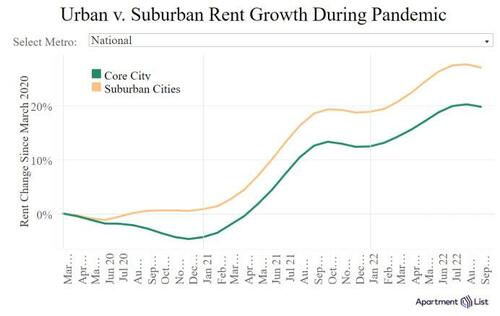 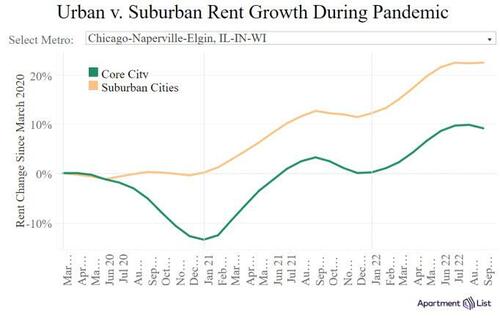 Many workers who lost jobs or who no longer needed to be close to an office decided that it was no longer wise to pay a premium for downtown rentals. As existing renters gave up their leases without new renters to take their places, rents in core cities were discounted. This was especially true in the nation’s priciest cities, such as San Francisco, Seattle, Boston, and New York City, all of which saw their median rents plummet by at least 20 percent by the end of 2020. On average, rents in the core cities that we analyzed fell by 4.6 percent from March through December of 2020. Meanwhile, rents in the suburbs of these metros ticked up slightly, rising by an average of 0.7 percent.

The fastest rent growth since March 2020 has been occurring in the suburbs that sit furthest from the urban core. 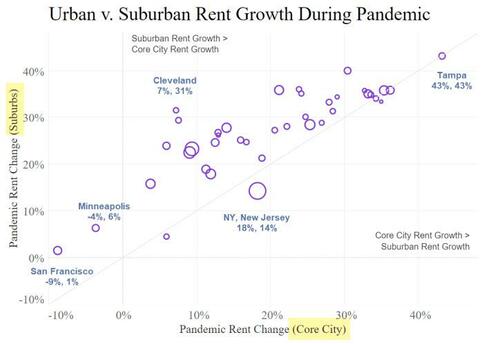 The widest gap is Cleveland. New York bucks the trend with an 18% rise in the city and 14.2 percent in the suburbs.

Even as large core cities have rebounded strongly from early-pandemic declines, rent growth has continued to be fastest in the suburbs. Even before the pandemic, increasingly unaffordable housing costs close to the urban core had been pushing more and more renters to the far peripheries of the nation’s large metro areas, resulting in a proliferation of “super commuters”.

The above trend is part of the Explosion of Super Commuters 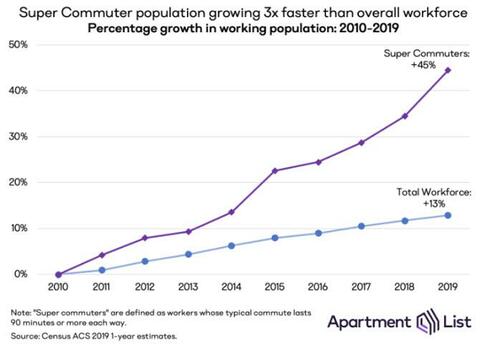 Work from home and hybrid arrangements have enhanced this trend. 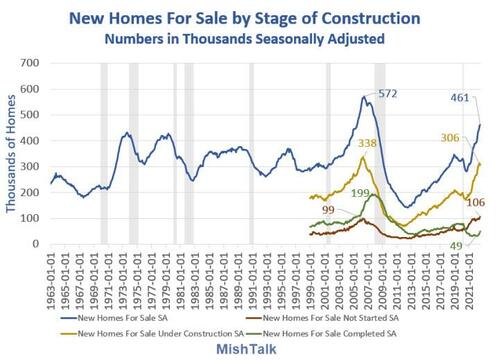 Of the purported 461,000 homes for sale, only 49,000 are complete. However, there are 306,000 units under construction. That number exceeds every total but the final stages of the housing bubble years.

Are those homes in the right places, enough to match the ongoing flight from big cities?

If not, don’t expect much rent relief. And shelter is about 32 percent of the CPI.