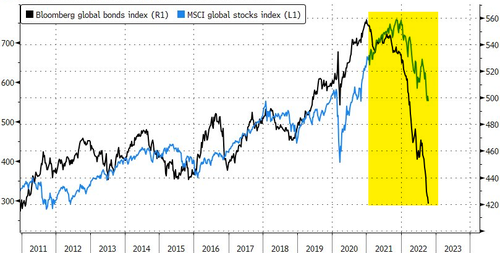 New York-based BlackRock reported a smaller-than-expected decline in quarterly profit as demand for exchange-traded funds and other low-risk financial products increased fee income. Most of its money is made from fees charged for investment advisory and administration services.

Here are some of the highlights on revenue via Bloomberg:

BlackRock said the decline was “primarily driven by the impact of significantly lower markets and dollar appreciation on average AUM and lower performance fees.”

Remember, Fink warned in July 2021 that inflation wasn’t transitory and the Fed would have to react. He called for inflation to be at “3.5% to 4.0%,” though it more than doubled his calculations to 9% in June. Central bankers are aggressively increasing interest rates worldwide and appear predisposed to commit a significant policy error as parts of the world are on the brink of recession.

Central banks have so far caused a collapse in global stock and bond prices.

Meanwhile, the Financial Times reported Monday that BlackRock lost over $1 billion in AUM from Republican states that resisted the firm’s ESG values.

UBS analyst Brennan Hawken downgraded BlackRock to Neutral from Buy on Tuesday with a new price target of $585 from $700. In a note, Hawken said that bond market turmoil is one of the most significant headwinds for BlackRock, as 61% of its active AUM is fixed income. 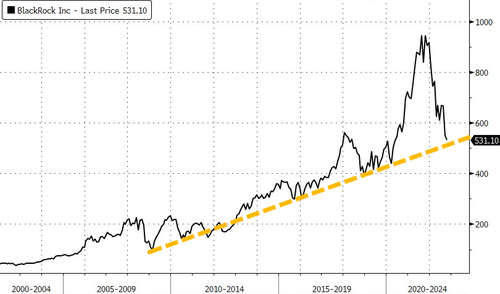 CEO Larry Fink stated that “the power of our diversified platform is most evident in times of uncertainty, and clients are turning to us more than ever for our comprehensive and integrated solutions.”