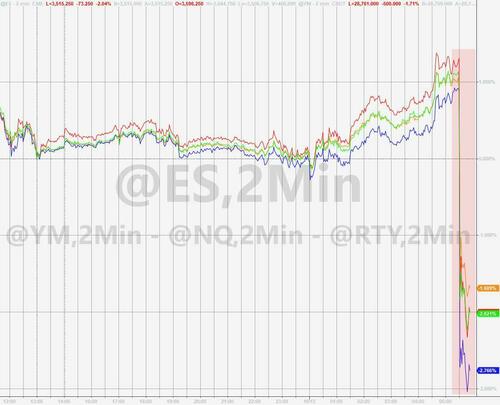 For all the talk of the world being on the verge of nuclear war courtesy of the dementia patient in the White House, a real life financial nuke just went off at 8:30am when the BLS reported a shocking CPI print so unexpectedly hot ( a 2.9-sigma upside surprise to consensus), that even the bears were shocked. The result was… well, an absolute disaster doesn’t even begin to cut it.

And as one would expect, alongside the shock and awe there was a barrage of delightful soundbite to go along with Wall Street’s reaction. Below we have summarized some of them:

“Horrible CPI number… what will the Fed to do on interest rates: Will they go 100 basis?”

“It is brutal… I do think that prices will start to moderate — I thought that this would already be happening at this point,” he tells Bloomberg TV. The issue now is that inflation has moved from the goods sector and has permeated into the services sector.”

“For Democrats, this is a disaster. Today’s is the final CPI report ahead of the Nov. 8 midterm election. You can bet that Republicans will be hitting this hard — worst inflation in four decades.”

For the Fed, the September CPI report seals the case for a fourth consecutive 75-basis-point hike. It calls into question the modal outlook from three weeks ago—that the Fed might be able to stop raising rates after 50 bps in December and 25 in February

“This was clearly a bad number. It’s just broad-based inflation. Is what it is…. Need much more goods disinflation to offset the high sticky parts of core.”

“That this was clearly a shock for markets. If ever there’s a time for people who do economic forecasting to be humbled, this is it.”

“This report raises the risk that we may see a new cycle high in headline inflation before the end of the year. With energy prices moving back up, a mid-90s oil price in December could see us surpass the 9.1% headline peak from June… Looking at the components, what is most worrying is the big jump in services. Service inflation is the most sticky. This is where both shelter prices and wages reign supreme.”

“This print not only poses a challenge for the Fed but also the broader economy. Inflation was supposed to be moderating but instead we got a print that moved in the wrong direction.”

“There are still clear signs of disinflation everywhere else we look. The drop in used auto prices should continue to feed through, the survey evidence points to weakening price pressures, and the private sector measures of new rents point to an eventual sharp moderation in shelter inflation too – although that wont feed through in earnest until H1 2023.”

“But it’s not just rent. Core services excluding rents is growing at over 6.5% year-over-year.  With no rent relief on the horizon, core services price gains will continue to underpin core inflation.”

“It’s difficult to see the 10-year yield not break 4% today on this CPI report. The yield curve may continue to flatten and retest recent lows as the market will likely price for an even more aggressive Fed terminal interest rate.”

“The September CPI print is not good — and even so, the subdued monthly headline rate likely marks the best inflation news we’ll get for a while. With gasoline prices rising again since OPEC+ announced cuts, and core services inflation still robust, the upside surprise in today’s print — plus the unfavorable prints expected in coming months — will make it difficult for the Fed to communicate a downshift in the pace of rate hikes in December, as policy makers indicated in the latest dot plot.”

“Once again, hotter than expected US inflation numbers for both the core and headline measures… and, therefore, bad news for the Federal Reserve and markets and, more importantly, the economy and especially the most vulnerable segments of society.“

“Stronger report on headline and core so the market move makes sense. The market pricing for the terminal rate was 4.66% before the report, now at 4.7% and this can keep nudging higher. We are looking for 5% terminal (effective of 4.83%).

“I do not think this changes much for the Fed, just that it lowers the idea of a Fed pivot. They’re likely to continue hiking at large 75bp clip in November, and increases the risk of another 75bp for December. Though we’re of the view that they will do 50bp. As they get further into restrictive policy territory, they will become less hawkish in terms of the pace of rate increases given they have hiked so much this past year and rising concerns about financial stability.”

And now we sit back and wait for something to break.