Investors Set To Learn How Bad Things Really Are

US inflation is at a 40-year high, Europe is enduring an energy crisis and major economies are nearing recession. The impact on earnings is about to be laid bare.

Analysts will scrutinize results and conference calls over coming weeks for details of how firms plan to navigate pressure on margins from rising input and labor costs. Soaring interest rates and China’s Covid restrictions are also fanning worries that they haven’t been fast enough to cut earnings estimates.

“No one expects the profit warnings to date will be the end of the story,” said Danni Hewson, an analyst at AJ Bell.

While Deutsche Bank AG strategists say analyst downgrades of US earnings since July have been among the sharpest on record, Morgan Staney’s Michael J. Wilson warned estimates are still too high. Goldman Sachs Group Inc. strategists last month lowered their forecast on European earnings, taking a contrary view to the consensus, which still expects growth in 2023.

“Estimates are too optimistic and not incorporating the pressure on margins,” said Peter Garnry, head of equity strategy at Saxo Bank A/S. “Our guess is that earnings will come in weaker than estimated and wage pressures will surprise analysts, while many companies possibly skip their outlook due to the lack of visibility.”

More than 60% of respondents to Bloomberg’s MLIV Pulse survey see the results season pushing US stocks even lower following this year’s 25% drop in the S&P 500, while references to inflation and recession are expected to dominate earnings calls.

With Wall Street banks including JPMorgan Chase & Co. and Citigroup Inc. due to kick things off on Friday, here are five things that market participants are watching this earnings season:

Profit margins have thus far been largely resilient, though strategists don’t expect that to last as rising prices undermine consumer demand and push up input costs.

Ford Motor Co. already flagged more than $1 billion in extra supplier costs for the third quarter, and UBS Group AG analysts have warned that US and European auto industry profits will likely slump 50% next year. Morgan Stanley strategists said costs at retailers, chipmakers and IT hardware companies are also at risk.

According to James Athey, investment director at Abrdn, stocks aren’t pricing that in yet. Not only are 12-month forward earnings forecasts “way too high,” equities are “failing to account for risks to growth and financial stability from inflation,” he said.

The dollar’s relentless advance is likely to crimp earnings at US companies with a large international exposure. Roughly 30% of US corporate revenues are generated overseas, according to Goldman Sachs Group Inc. strategists, who note that a stronger greenback has historically correlated with fewer sales beats.

From an international perspective, while a rising dollar is a problem for European and UK importers, exporters are benefiting from a weaker euro and pound. French pharmaceutical giant Sanofi said last month it expects a positive currency impact of about 10% in the quarter.

3. The Specter of Recession

Aggressive monetary policy tightening at a time of slowing growth has increased the chance of an economic contraction, but earnings estimates don’t yet reflect this risk, strategists say. According to Sanford C. Bernstein’s Sarah McCarthy and Mark Diver, European earnings projections need to fall by another 7% based on average peak-to-trough declines of past downturns, excluding the financial crisis and the pandemic.

US energy earnings are expected to have doubled year-on-year in the third quarter, again posting the sharpest jump among S&P 500 sectors despite weaker oil prices, according to Bloomberg Intelligence.

But in Europe, which is grappling with a severe energy crisis, a weaker-than-expected report from Shell Plc this month sounded an alarm for industries under pressure from soaring natural gas prices. 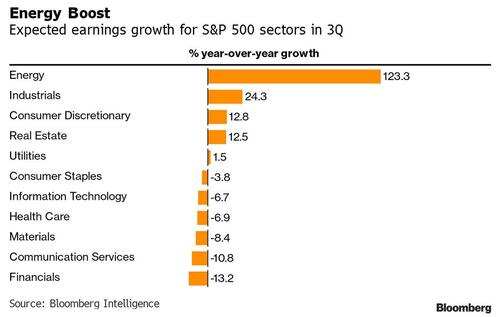 US and European companies dependent on China for their supply chains are again expected to have seen an impact from extensive lockdowns as the country sticks to its Covid Zero strategy. Luxury-goods makers such as LVMH and Kering SA have a particularly big exposure on the region.

Measures that affect factories in China also have ripple effects elsewhere as they hit the availability of components and raw materials — and latest economic data showed services activity in the country contracted in September for the first time in four months.