Quid Pro No; Saudi Arabia Says US Asked For Oil-Cut Delay Until After Midterms 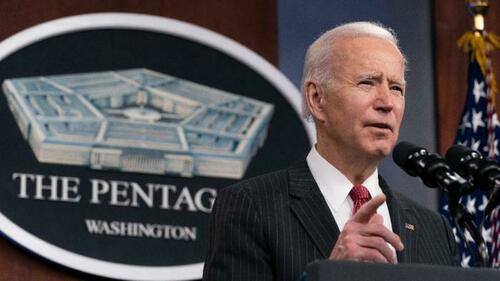 But when it comes to threatening the Kingdom of Saudi Arabia with ‘consequences‘ if they cut oil production, they weren’t having it.

In a scorching Wednesday letter, the Kingdom rejected White House criticism of OPEC+’s decision to cut oil production, and confirmed that the Biden administration attempted to coerce them into postponing the cuts until after midterms.

BREAKING: The Kingdom of Saudi Arabia confirms Biden attempted to coerce them to postpone oil cuts until after the midterms, announce they have rejected his quid pro quo pic.twitter.com/MGNRbZVrRk

Hours before the letter was released, White House national security adviser Ned Price denied rumors that the administration asked for the delay.

“I certainly can’t confirm that report. What I can confirm is that we conveyed a consistent message to the Saudis: energy supply needs to meet energy demand. We have made the point repeatedly that we have a multiplicity of interests with Saudi Arabia; energy is one of them,” he said at a State Department press briefing.

“And in the context of those discussions regarding energy, we have had senior members of the administration travel to Saudi Arabia in recent months. This was not—this engagement did not take place solely in the context of October 2022 or September 2022.”

But the Saudi foreign minister’s statement hours later made clear that “the Government of the Kingdom clarified through its continuous consultation with the U.S. Administration that all economic analyses indicate that postponing the OPEC+ decision for a month, according to what has been suggested, would have had negative economic consequences.”

More via The Epoch Times;

After OPEC+ on Oct. 5 decided to slash oil output by 2 million barrels per day, White House press secretary Karine Jean-Pierre told reporters aboard Air Force One that it was a “mistake” and accused the group of “aligning with Russia.”

Russia is one of the OPEC+ cartel’s 13 key members, along with Iraq, Iran, Kuwait, Venezuela, and more.

Responding to the criticism, Saudi Arabia’s foreign minister insisted OPEC’s decision was “purely” about maintaining a balance of supply and demand and limiting volatility in the oil markets.

“The Government of the Kingdom of Saudi Arabia would first like to express its total rejection of these statements that are not based on facts, and which are based on portraying the OPEC+ decision out of its purely economic context,” bin Farhan Al Saud said in a statement.

Bin Farhan Al Saud said Saudi Arabia takes a “principled position” with respect to the Russia-Ukraine war and described the attempts of White House officials “to distort the facts” as “unfortunate” but ultimately unpersuasive.

Saudi Arabia, the foreign minister said, supports U.N. resolutions regarding the Russia-Ukraine war “based on the Kingdom’s position on the importance for all countries to adhere to the United Nations Charter, principles of international law, and the kingdom’s rejection of any infringement on the sovereignty of countries over their territories.”

“The Kingdom stresses that while it strives to preserve the strength of its relations with all friendly countries, it affirms its rejection of any dictates, actions, or efforts to distort its noble objectives to protect the global economy from oil market volatility,” bin Farhan Al Saud said.

Bin Farhan Al Saud added that the kingdom views its relationship with the United States “as a strategic one” beneficial to both, and in what was perhaps a diplomatic hint, stressed the importance of “building on the solid pillars” of the relationship.

“The Kingdom also stresses the importance of building on the solid pillars upon which the Saudi-U.S. relationship had stood over the past eight decades,” he said.

“These pillars include mutual respect, enhancing common interests, actively contributing to preserve regional and international peace and security, countering terrorism and extremism, and achieving prosperity for the peoples of the region.”

The Saudi official’s statement on the heels of OPEC’s decision deals a second blow to President Joe Biden and his fellow Democrats ahead of the midterms.

The Biden administration had for months tried to lobby Saudi Arabia to produce more oil, not less, with Biden even visiting the kingdom in July.

OPEC’s decision to reduce oil production puts pressure on the Biden administration, which has significantly dipped into the U.S. Strategic Petroleum Reserve (SPR) for several months in an effort to keep gas prices down for Americans, citing the Russia-Ukraine war for higher prices.

Since Biden took office in January 2021, Republicans and oil industry officials have lambasted the administration for ending construction of the Keystone XL pipeline, suspending drilling leases, and favoring electric vehicles.

Officials in his administration have also been accused of being out of touch with ordinary Americans’ concerns while touting electric cars in the face of record-high gas prices earlier this year.