“Rent Inflation Seems Crazy”: Why The CPI Is Making The Same Huge Mistake Now It Did One Year Ago 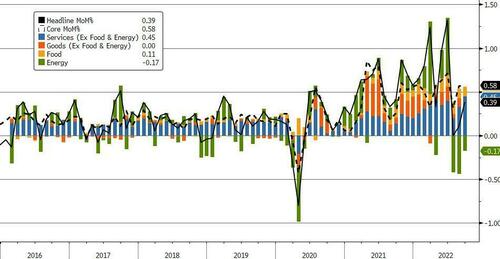 As we noted, Today’s CPI print – as hot as it was – was odd because while goods and energy inflation is now almost gone, services inflation is off the charts…

… and that’s mostly housing, shelter and rent, with the BLS reporting that “the shelter index also rose 6.6 percent over the last year, accounting for over 40 percent of the total increase in all items less food and energy.”

Which is great only… it’s about a year late. As we said earlier, “the time to panic about soaring rent was a year ago… as we did here, but not the Fed. Now BLS has just caught up to reality 6-9 months ago. Meanwhile real life rents are finally fading”

The time to panic about soaring rent was a year ago… as we did here, but not the Fed.

That’s right: while the BLS chart of shelter and rent inflation is off the charts… 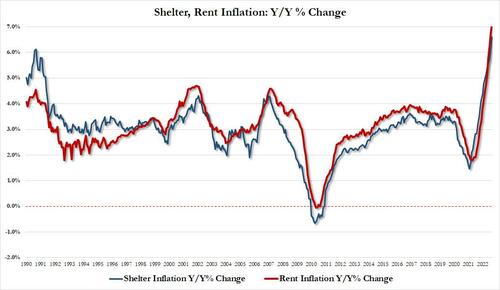 … that’s only because, as we explained extensively last year, both rent and shelter data is delayed as much as 9-12 month. And indeed, moments before the CPI report, Redfin reported that the Median rent had finally posted its first notable decline in almost two years, to wit: the median U.S. asking rent rose 9% year over year in September to $2,002, the slowest growth since August 2021 and the first single-digit increase in a year. September was the fourth-consecutive month in which annual rent growth decelerated, with rents climbing at half the pace they were six months earlier. “The rental market is coming back down to earth because high rents and economic uncertainty have put an end to the pandemic moving frenzy of 2020 and 2021, when remote work fueled an enormous surge in housing demand that would’ve otherwise been spread out over the coming years,” said Redfin Deputy Chief Economist Taylor Marr. “Rising supply is also causing rent growth to slow. Scores of apartments that have been under construction are now coming on the market, and more homeowners are choosing to become landlords instead of selling in order to hold on to their record-low mortgage rates.”

Marr continued: “We expect rent growth to slow further into 2023 as Americans continue to hunker down and more new rentals hit the market.”

Of course, the BLS won’t know this for another 6-9 months, just as they did not know that rents were hyperinflating last summer, when we were warning about what was really going on below the surface.

In other words, on the left we have the BLS’s much-delayed data, and on the right we have what is actually happening:

But it’s not just us who – as much as we would like to continue our victory lap – are cautioning against reading too much into today’s red hot inflation number. As Academy Securites strategist Peter Tchir writes in a note titled “Not That Anyone Will Care, But OER Seems Crazy” something very messy is going on with the rental data.

Tchir first highlights what we pointed out earlier, to wit from today’s BLS CPI report

The rent index rose 0.8 percent in September. The owners’ equivalent rent index also increased 0.8 percent over the month, the largest monthly increase in that index since June 1990.

He adds: “The bold is mine, but I personally was shocked to discover that September 2022 was the largest monthly increase in OER in over 30 years!”

Tchir also look to Redfin, and specifically its Rental Market Tracker Report, which showed their Median Monthly Rent dropping by 2.5% in the month of September: “Yes it is median, yes it is one companies data, but intuitively that seems more likely than highest monthly gains in 32 years”

Alas, it’s not that simple: at the same time, the Zillow rent index tells a different story. Rents were increasing, month on month at a dangerous rate back in the summer and fall of 2021 – during peak transitory and while QE was still “necessary”. Rents, according to Zillow, are still running higher than longer term averages, but not by much and they’ve been headed in the right direction.

So what to make of this? Here is Tchir’s conclusion:

Just following orders is not an excuse for anyone, and it seems shocking that we may base policy (and certainly market reaction) on numbers that do not seem to reflect reality.

It seems (and has seemed clear) to me that CPI, for example massively understated inflation last year. While everywhere you turned, there were horror stories about price increases, CPI barely reflected them.

Now, are we just catching up to problems we’ve already lived through?

Two wrongs don’t make a right, and this little rant is unlikely to sway markets, at least not today, but I have a lot of difficulty digesting today’s CPI, when the biggest input contributed to 0.3 to the monthly total of 0.6 (Shelter is 32.5% of total CPI and I believe it is 42% (32.5/78.1) of CPI ex food and energy).

Maybe that is an accurate reflection of where we are in the economy today, but I don’t buy it. On the other hand, I’ve learned to not fight the Fed or markets, so not sure there is much to do with this information, except file it into my growing list of reasons why we will experience a hard landing.

Tchir is right, and of course the Fed will realize it has overtightened into a housing market that has peaked some time in the summer of 2023. By then, however, the economy will be in freefall and the central bank will be planning its next massive stimulus because just as we said in January, nothing really ever changes…