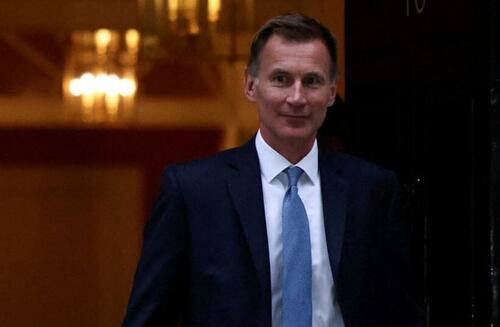 With the Bank of England having – as promised – ended its “temporary” bond-buying bailout of the UK’s pension funds, freshly-crowned Chancellor of the Exchequer Jeremy Hunt set to work tearing up what was left of PM Truss’s market-chaos-inducing economic program, scrapping tax cuts and removing support for household energy bills to restore order to the public finances.

In a statement Monday, the BOE confirmed that its bond purchases had ended as planned and said it had helped pension funds adjust to higher interest rates.

“As previously announced, the Bank terminated these operations and ceased all bond purchases on Friday 14 October,” it said.

“As intended, these operations have enabled a significant increase in the resilience of the sector.”

More importantly for the markets, Mr. Hunt, speaking ahead of an emergency statement to parliament on the economy, said “the most important objective for our country right now is stability,” as he announced a revised plan he said would raise around £32 billion a year, equivalent to $36 billion, for the government exchequer.

Together with earlier U-turns, the decisions reverse almost all of the £45 billion in tax cuts and giveaways Truss announced in early September, raising questions about whether she can survive in office.

“There will be more difficult decisions, I’m afraid, on both tax and spending as we deliver our commitment to get debt falling as a share of the economy over the medium term,” Hunt said, adding that the priority will be on protecting “the most vulnerable.”

For now, Hunt’s efforts to reassure markets are working with cable bid (or as some witty twitterers have begun calling it… BRITCOIN)… “Clearly the market likes the fact that Jeremy Hunt has the sense to bring forward the statement and that shows that he does have an understanding of the importance of financial markets and speaking to investors,” said Jane Foley, senior foreign-exchange strategist at Rabobank.

“That’s a move in the right direction but there’s still a lot of uncertainty as to whether Truss can remain in her job.”

“I think we’re in for a period where UK credibility is continually questioned and UK assets remain incredibly volatile for a significant period of time,” Benjamin Jones, Invesco Director of Macro Research, said on Bloomberg Television.

“Watching the gilt market will be absolutely key in understanding if the market does believe Hunt to be more stable and if he will be able to push these policies through.”

The question many have this morning is – who is really running the government, Truss or Hunt (or The Market)? (as the resignations from the former’s party have already begun). 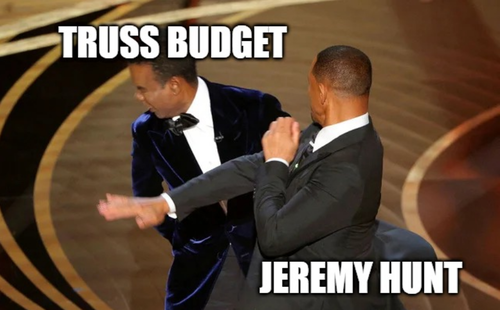