Liz Truss Is Not To Blame For UK’s Market Turmoil. The Bank Of England Is

We live in strange times. The same people that vehemently defended massive deficit spending and money printing as the solution to the global economy now blame the turmoil of the UK bond and currency markets on a deficit-increasing budget.

I find it astonishing that no one of the so-called experts that have immediately placed the cause of the British market volatility on Liz Truss’ budget have said anything about the collapse of the yen and the need for Bank of Japan intervention, which has been ongoing for two weeks.

US dollar and main currencies via Bloomberg

Why did so many people assume the Truss mini budget was the cause of volatility when the euro, the yen, the Norwegian krone, and most emerging market currencies have suffered a similar or worse depreciation versus the US dollar this year? What about the bond market? This is the worst year since 1931 for bonds all over the world, and the collapse in prices of sovereign and private bonds in developed and emerging market economies is strikingly similar as those of the UK fixed income peers.

The same economists that say deficits do not matter and sovereign nations can spend and print currency as they please (“expansionary policies” they call them) now say that a UK Keynesian budget that increases spending, but cuts taxes, may destroy the economy. Yet they forget Japan had to massively intervene the yen as well without any tax cut and keeping its misguided fiscal policy of spending and borrowing.

British pension funds’ unfunded liabilities are not a problem caused by the mini budget nor solely a UK problem. It was an enormous problem in 2019-2020 disguised by insane currency printing. Unfunded global liabilities for state pension funds in the U.S. were already $783 billion in 2021 and rose to $1.3 trillion in 2022 according to Reason Foundation. The funded ratio of state pensions was just 85% in 2021 and has fallen below 75% in 2022.

What happened in the years of negative rates and massive currency printing? Pension funds used liability-driven investing (LDI) strategies. Most LDI mandates used derivatives to hedge inflation and interest rate risk. And what happens when inflation kicks in and rates rise?

“As interest rates have risen, the notional value of some of the derivatives held in LDI portfolios has fallen. The result: increased collateral calls. The speed at which rates have risen means some pension plans have had to liquidate portfolios to meet collateral calls” according to the Investment Association’s latest report in September and Brian Croce at Pensions & Investment.

Nearly two-thirds of Britain’s defined benefit pension schemes use LDI funds, according to TPR and Reuters.

Liz Truss and Kwasi Kwarteng are not to blame for this insanity. The policy of negative real rates and massive liquidity injection of the Bank of England is. 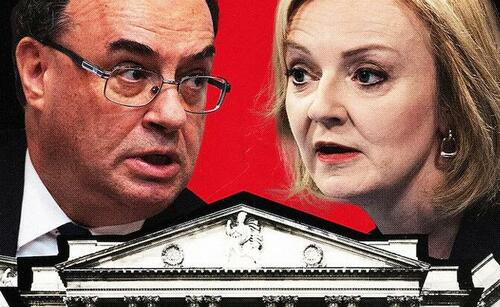 Kwarteng and Truss are only to blame for believing that the party of policies of spending and printing defended by almost all mainstream Keynesian economists should work even when the music stopped.

In these past years, British and developed nations’ governments did not pay any attention to fiscal imbalances because money was cheap and abundant. Deficits soared, spending was uncontrolled, and the problem was hidden in the balance sheet of central banks that, like the Bank of England, purchased more than 100% of net issuances of government debt. After years of printing money and increasing debt to new all-time highs, persistent high inflation appeared, and now central banks need to hike rates and reduce money supply growth just when fixed income funds are loaded with toxic debt at negative nominal and real yields… And the rate hikes mean margin calls are more expensive and losses are unbearable.

UK pension funds need to get rid of the liquid assets they own as margin calls rise. Inflation arrived after years of massive currency printing and debt monetization and investment funds all over the world, but especially in the euro area, UK, and Japan, are seeing their portfolios melt down with massive nominal and real losses. When margin calls kick in, many need to sell their most liquid assets, Gilts in the UK, or government bonds elsewhere. 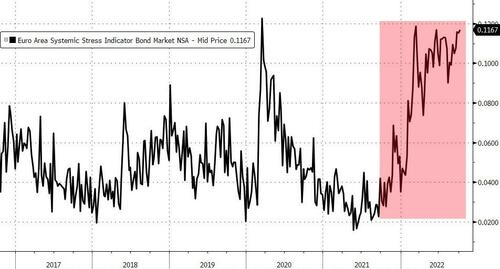 Liz Truss and Kwasi Kwarteng are not to blame for the insanity of the past years or Rishi Sunak’s ultra-Keynesian budgets. They are only to blame for believing that another dose of Keynesian deficit insanity would not harm.

Mr Kwarteng’s demise is just a casualty delivered by the modern monetary theory crowd and the monetary laughing gas city to justify that the problem was a ludicrous tax cut not years of currency printing and deficit increases.

What has happened in the UK or Japan is likely to happen soon in the eurozone, which accumulated more than twelve billion euro of negative-yielding bonds in the years of cheap money and reckless stimulus plans.

Liz Truss is not to blame for 20 years of monetary insanity and fiscal irresponsibility. She is to blame for a budget that increases spending without cutting unnecessary expenses.

The irony of it all is that the defenders of monster deficits and borrowing if it comes from bloating the size of government feel vindicated. It was the evil tax cuts!

The political analysis of the mini budget is astonishing. No one in the UK parliament sees any need to cut spending it seems, yet those expenses are consolidated and annualized, which means that any change in the economic cycle leads to larger fiscal imbalances as receipts are cyclical and, with it, more currency printing. The assumption that raising taxes will generate perennial annual increases in receipts no matter what happens to the economic cycle can only be defended by a bureaucrat.

Deficits are always a spending problem. Bloomberg Economics’ analysis shows that if a U-turn in tax cuts had no impact on economic growth, if it generated the receipts they estimate and borrowing costs ease, three enormous and impossible “ifs,” the financial hole in the UK budget would still be twenty-four billion pounds only to keep debt to GDP stable.

Every time a UK government buys the argument that higher tax rates finance higher annual and consolidated spending, they get one step away from being a leading global economy and closer to bringing the UK back to the seventies.

Even assuming no impact on the economy, “keeping the planned rise in corporation tax to 25% from 19% from April 2023, which Hunt’s predecessor Kwasi Kwarteng intended to cancel in the mini-budget, saves about £19 billion”, writes Jamie Rush at Bloomberg. However, that saving figure may be optimistic as it considers a level of earnings and profits in the United Kingdom that are more than debatable as we see consensus corporate earnings estimates fall month after month.

Jeremy Hunt, the new chancellor of the exchequer, seems to believe that raising taxes and massively increasing spending will calm markets. Why? Following the Japan and eurozone model of fiscal consolidation via receipts does not work. More taxes and more spending mean less growth, less employment, weaker real wages, and more debt. Furthermore, it is not calming markets in their own nations either, because the turmoil comes from the hangover of cheap money excess, not a modest tax cut. More importantly, increasing the tax wedge and spending burden perennially damages the UK’s possibilities of becoming a country that attracts investment and capital from the rest of the world.

Truss should have presented the budget she believes in, not the one that she thought that consensus would buy. By presenting an “expansionary” spending budget that she probably did not even believe in sprinkled with a few modest tax cuts she handed her opponents the axe to use against her, and the opportunity to attack came from a global market collapse and blaming it all on minuscule tax incentives.

Meanwhile, labour in the UK demands more monetary and fiscal insanity with an economic program that aims to increase spending even more and finance the deficits with monetization of debt. And some call that “calming the market.”

The only lesson for the United Kingdom is to remember that if you follow Greece’s economic policies, you get Greek debt, unemployment, and growth. The UK government should do everything to avoid the seventies’ elevated inflation and economic stagnation, not try to replicate them vigorously.