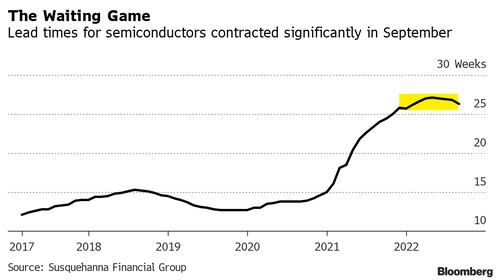 The historic slowdown in the personal computers market has led to one of the biggest declines in semiconductor lead times in years, a sign the chip crunch could be set to ease.

Bloomberg cited a new report from Susquehanna Financial Group that outlines semiconductor lead times, the gap between when a chip is ordered and when it is delivered, declined four days in September to 26.3 weeks. The month prior, lead times were around 27 weeks.

Overall chip lead times hit a record high of 27.1 weeks in May and have rounded a possible top here, as a decline in lead times from here would only suggest the global chip shortage is abating. Though lead times are still more than double from pre-pandemic levels.

One of the drivers of shrinking lead times could be the worldwide decline in PC shipments in the third quarter. Data from research firm Gartner Inc. showed shipments plunged 19.5% in the quarter versus a year ago.

“This quarter’s results could mark a historic slowdown for the PC market.

“While supply-chain disruptions have finally eased, high inventory has now become a major issue given weak PC demand in both the consumer and business markets,” said Mikako Kitagawa, an analyst at Gartner.

Kitagawa said that the US market for PCs fell 17.3% in the third quarter, driven by a significant decline in laptop sales.

Semiconductor companies such as Intel Corp., Advanced Micro Devices Inc., and Micron Technology, Inc. have warned about the dismal macro environment that has crippled demand for PCs.

Last month, Korea Economic Daily warned: “As the semiconductor industry has entered a full-fledged ice age, there are many forecasts in the industry that the recession will continue until the first half of next year when semiconductor inventories are eliminated.”

We’ve pointed out that inventories are soaring for chips, such as graphics processing units (GPUs), leading to significant pricing discounts. 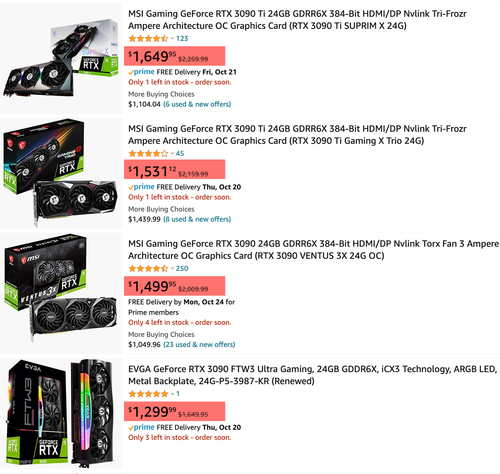 Besides the PC bust helping to alleviate the chip crunch, the Biden administration’s new export curbs on US chips to China could lead to even more supply.

Now could be the time to build a new PC. Motherboards, GPUs, memory, and other critical components are significantly discounted from just months ago.