Copper Remains Range-Bound As Bears And Bulls Duke It Out

By Ag Metal Miner via OilPrice.com

Copper prices continue to show signs of short-term consolidation following a brief rebound that stalled in late August. Meanwhile, the bottom found in mid-July and the peak of the subsequent rebound created a short-term trading range for the current sideways trend.

Accumulating rate hikes from the Federal Reserve and central banks worldwide added significant weight to copper prices over the past few months. The Fed, in particular, has increased interest rates at the steepest pace in modern history. In September, it issued its third consecutive 75 basis point hike. Even so, Fed officials showed no hesitation in continuing the approach until prices stabilize. That said, officials have started to split on whether to continue on pace or shift to a softer trajectory.

For one, the collective impact of global rate hikes will prove a substantial drag on demand and, therefore, inflation. Indeed, two officials recently voiced the need for restraint going forward. In their opinion, the effect of the Fed’s efforts to date may simply be slow to materialize. In an early October speech, Fed Vice Chairwoman Lael Brainard noted, “it will take time for the cumulative effect of tighter monetary policy to work through the economy and to bring inflation down.” She continued, “the moderation in demand due to monetary-policy tightening is only partly realized so far.”

Experts on The Fence Over the Federal Reserve’s Actions

Other officials appear far less concerned about the Fed’s aggressive tactics. In response to the current level of inflation, Governor Christopher Waller commented, “this is not the inflation outcome I am looking for to support a slower pace of rate hikes or a lower terminal policy rate.”  Beyond that, a still robust labor market will likely outweigh the concerns of more cautious officials. Although growth eased from the previous month, the Labor Department reported that the U.S. added 263,000 jobs in September. This total proved larger than expected, contradicting the Fed’s goal to cool labor demand.

As the Fed pressures demand, several factors have added a bullish counterweight. For one, Chinese copper demand remains strong, holding copper prices up. In fact, refined copper imports through August saw a 9.8% year-over-year rise. This is primarily due to heavy increases throughout the summer months. Meanwhile, infrastructure spending, specifically on renewable energy projects, helped lift demand after the Q1 slump.

Secondly, copper production in South America remains pressured. For example, Peruvian copper production fell 1.5% in August, according to the Ministry of Energy and Mines (MINEM). Meanwhile, production in Chile fell even more drastically. According to Cochilco, total Chilean output in August dropped 10.2% from 2021. Both Peru and Chile have faced numerous mining disruptions throughout the year, including protests and reduced mining activity. 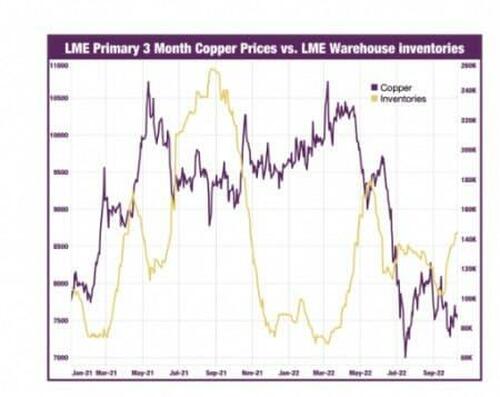 Copper deliveries face new and potential restrictions from the LME. Indeed, the most recent announcement added significant upward pressure to copper prices.  First, the LME announced the immediate restriction of new metal (including copper) from Russia’s Ural Mining & Metallurgical (UMMC). Therefore, any new material delivered to the LME must be proven not to breach the UK’s sanctions against the company’s co-founder, Iskandar Makhmudov.

Separately, the LME requested member input regarding a total ban on Russian metal. The statement noted, “the LME believes it is appropriate, in the absence of general sanctions against Russian metal brands, to seek market views on the expected accessibility of Russian metal in 2023.” While these actions could challenge historically low warehouse inventories, stocks have nonetheless continued to grow since early September. Beyond that, inventory levels do not necessarily impact copper prices. As of 2011, the two continue to display a low inverse correlation of just 17%.

For copper prices, widespread monetary tightening will continue to squeeze long-term demand. Despite the internal division, the Federal Reserve continues to dampen any hopes of a dovish pivot. Indeed, so far, no officials have gone on record to call for a rate hike pause. At this point, most investors expect another 75 basis point rate hike come November.

For now, supply-side constraints and strong Chinese demand have proven enough to halt the macro downtrend. Current copper prices appear resistant to creating either a higher high or lower low. Instead, they continue to move sideways within a tight range.