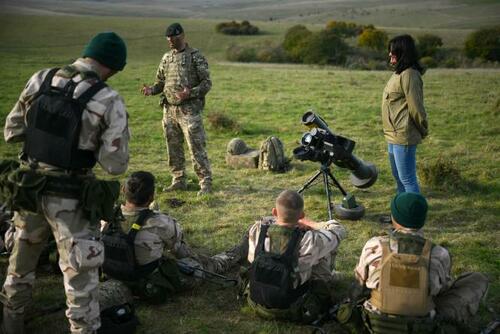 On Monday the European Union announced that it has approved a military training mission for thousands of troops that will take place in Europe, along with almost $500 million more for arms purchases.

The purpose, the EU said, is to “effectively conduct military operations” to enable Ukraine to “defend its territorial integrity within its internationally recognized borders, effectively exercise its sovereignty and protect civilians.”

The program will be under the command of French naval officer Vice Adm. Herve Blejean and will be headquartered in Brussels, slated to run for at least two years. This strongly suggests Europe is preparing to support Kiev for a long-haul conflict, as has also been suggested by some US generals. It also without doubt will be very expensive, as such full military training ops tend to go.

Troop training is expected to primarily take place in Poland and Germany, and could see 15,000 Ukrainians pass through the program, according to details reported in AP.

EU foreign policy chief Josep Borrell remarked on the need for the program to be overseen from Brussels, saying he’s “strongly convinced that putting together the capacities of the European armies we can offer a much better product.”

And yet, as Politico reported days ago in the run-up to Monday’s EU vote on the new Ukraine program, there’s growing alarm over member countries not getting reimbursed for defense deliveries already sent to Ukraine. In previewing the new $500 million in now approved Ukraine defense aid, the report detailed:

The additional weapons funding would bring the EU’s total to €3.1 billion since the start of Russia’s war in Ukraine — all sourced from the “European Peace Facility,” a fund that operates outside the EU’s normal budget, which is prohibited from paying for such military endeavors.

But importantly, “The fund has been used to pay back EU countries that ship weapons to Ukraine — a first for the EU. But it has also been inundated by reimbursement requests that have far outstripped the money authorized for the effort, meaning that more recently the EU could only cover half of the costs.”

Borrell was asked about this on Monday by a reporter, to which he responded pointedly, “There is enough money. Do not worry about the money.”

#Europe | If the refunds aren’t made to members by the EU for the whole amount, it’d discourage the countries to send any more weapons to Ukrainehttps://t.co/SSnSJE3dnZ

This doesn’t exactly sound reassuring given Warsaw had already presented a bill for €1.8 billion, but was only compensated for less than 50% of that. But it could be that Borrell is inspired by his American counterpart politicians, who have at every turn acted like Washington has the ability to present Ukraine with a perpetual blank check, albeit at taxpayer expense and of future generations of Americans.