Last week, the FOMC published its minutes from the September meeting, confirming its recent stance that Fed rate hikes will continue until inflation is vanquished. To wit:

“Many participants noted that with inflation well above the Committee’s 2 percent objective and showing little sign so far of abating, and with supply and demand imbalances in the economy continuing, they had raised their assessment of the path of the federal funds rate that would likely be needed to achieve the Committee’s goals.”

As noted previously, the problem with this view is that the Fed is managing monetary policy based on lagging economic data.To wit:

“As the Fed continues to hike rates, each hike takes roughly 9-months to work its way through the economic system. Therefore, the rate hikes from March 2020 won’t show up in the economic data until December. Likewise, the Fed’s subsequent and more aggressive rate hikes won’t be fully reflected in the economic data until early to mid-2023. As the Fed hikes at subsequent meetings, those hikes will continue to compound their effect on a highly leveraged consumer with little savings through higher living costs.

Given the Fed manages monetary policy in the “rear view” mirror, more real-time economic data suggests the economy is rapidly moving from economic slowdown toward recession.”

While Fed rate hikes remain Powell’s preferred tool to combat inflation, the reality is that inflation will drop markedly over the next several months. Such is something we wrote in early October.

With households already struggling to make ends meet, the impact of Fed rate hikes on consumption, the main driver of economic growth, will occur quickly. A recent Bank of America survey noted that inflation has caught up to income growth.

A historical review suggests further Fed rate hikes breaking something is more probable than many expect.

The table below shows each previous peak in Fed rate hikes and the corresponding unemployment, inflation, house price, and real GDP growth rates. (The last data point is current. We will update the table as Fed rate hikes continue. When the Fed stops hiking rates, the final data points will correspond to the rest of the table.) 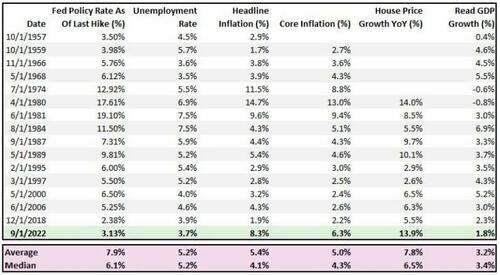 What is critical to note is that the previous Fed rate hike cycles exceeded the corresponding economic data points. However, this is deceiving as in each previous case, as the Fed rate hikes ensued, employment, inflation, housing, and economic growth were simultaneously slowing down. This time, such will be the case as the economy begins to buckle under the tighter monetary policy. 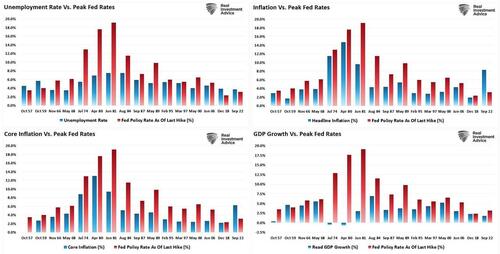 Such was because those aggressive Fed rate increases “broke something,” economically speaking, leading to a recession, crisis, and bear market. 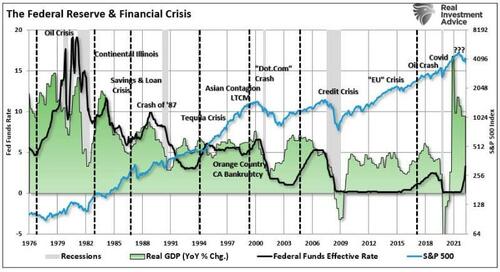 It was interesting to note in the FOMC minutes that Fed members are okay with “below trend” economic growth to bring down inflation.

“Participants noted that a period of below-trend real GDP growth would help reduce inflationary pressures and set the stage for the sustained achievement of the Committee’s objectives of maximum employment and price stability.”

The problem, as history clearly shows, is the Fed never achieves a soft landing. Rather, the inflationary problem it is trying to combat becomes a “deflationary recession” rather quickly.

A Recognition Of The Inevitable

Such is not completely lost on the FOMC, as noted in its recent minutes.

“Several participants noted that, particularly in the current highly uncertain global economic and financial environment, it would be important to calibrate the pace of further policy tightening with the aim of mitigating the risk of significant adverse effects on the economic outlook.”

However, while the Fed is aware of the risk, history suggests the “crisis levels” necessary for a monetary policy change remain in the distance.

Unfortunately, as shown above, history is riddled with monetary policy mistakes where the Federal Reserve over-tightened. As the markets rebel against quantitative tightening, the Fed will eventually acquiesce to the selling deluge. The destruction of the “wealth effect” threatens the functioning of both equity and credit markets. As I will address in an upcoming article, we are already seeing the early cracks in both the currency and Treasury bond markets. However, volatility is rising to levels where previous “events” occurred. 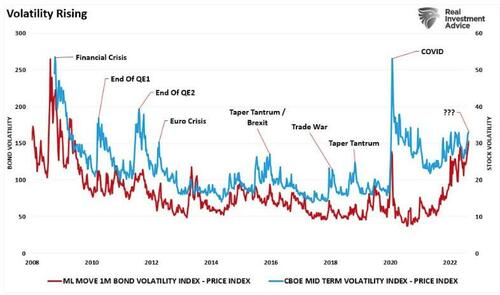 As noted in “Inflation Will Become Deflation,” the Fed’s more considerable threat remains an economic or credit crisis. History is clear that the Fed’s current actions are once again behind the curve. Each rate hike puts the Fed closer to the unwanted “event horizon.”

When the lag effect of monetary policy collides with accelerating economic weakness, the Fed will realize its mistake.

That risk is much greater than the Fed currently realizes.