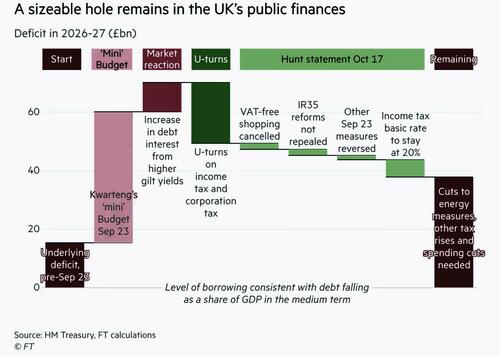 So much for the overnight FT report that the Bank of England, facing another battalion of angry bond vigilantes, would delay its QT.

Seeking to squash any speculation about its intentions, on Tuesday the Bank of England announced it has decided to begin asset sales on November 1 as it prepares to unwind the quantitative easing programme in which it accumulated almost £850bn of government bonds.

There is, however, a twist… so to speak: in a delightfully circular reference, the FT reports that “The BoE statement, which came after the FT reported the bank was likely to delay the asset sales, signals a shift from its previous plans. While before the BoE had intended to sell assets across the range of maturities from short to long-dated, it now will only sell short and medium-dated bonds.”

“The Bank will continue to monitor market conditions closely, and where appropriate factor that into the design of its sales operations,” the BoE said in its Tuesday evening statement, but added that it expects to conduct gilt sales during the fourth quarter “at a similar size and frequency as had been previously announced”, with any shortfall made up in 2023 or later.

The bank specified that the sales during the fourth quarter would be short-term gilts, with a remaining maturity of between three and seven years, and medium-term gilts, with a remaining maturity of up to 20 years. The Bank has always maintained that the gilt sales — so-called “quantitative tightening” — are not designed as a primary monetary policy tool and that instead it will use interest rates as the principal mechanism for getting inflation down.

As is well-known by now, the 30-year gilt, the longest-dated UK government bond, was at the heart of recent fears about the pension industry which sent its yield soaring above 5% amid concerns that triggered an emergency BoE purchasing program. The BoE had previously planned to begin the bond sales on 31 October, itself a delay from the earlier scheduled date of October 6, but all those plans were blown up by Truss’ now defunct “mini-budget.” The sales will now begin on November 1, to avoid a clash with a fiscal plan to be announced on October 31 by new UK chancellor Jeremy Hunt, the FT notes.

Hunt’s plan will be at the heart of efforts to close a £40bn gap in the government’s accounts. Market reaction is particularly important because of the adverse impact of the previous unfunded tax-cutting plans on the gilt and sterling markets.

The UK’s September inflation figure will be published on Wednesday and is expected to show prices rising at an annual rate of 10%. The bank is expected to raise interest rates from the current level of 2.25% at its next meeting on November 3.

Market participants anticipate that the rate will rise at least 0.75 % although many now maintain the increase will be less than had been likely before Hunt swept away most of the tax cuts in his predecessor Kwasi Kwarteng’s “mini” Budget of last month.