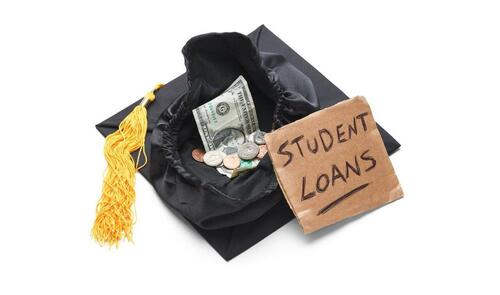 The Supreme Court on Wednesday was asked by a Wisconsin tax advocacy group to block the Biden administration’s student loan debt relief scheme, which is set to take effect this weekend.

The emergency filing from the Brown County Taxpayers Association asked Justice Amy Coney Barrett, who is responsible for handling such requests from the 7th federal appeals court, to delay implementation of the debt relief plan while their lawsuit plays out, according to CNBC.

And as the Epoch Times notes (emphasis ours), tens of millions of Americans across the country are now eligible to apply for student loan cancellation under President Joe Biden’s loan forgiveness program despite a number of lawsuits opposing the scheme.

Biden announced the launch of the official application site at StudentAid.gov on Monday after a “beta” test version of the site was rolled out over the weekend.

“Today, I’m announcing millions of people, working and middle-class folks, can apply to get this relief. And it’s simple and it’s easy, it’s fast,” Biden said in remarks delivered from the South Court Auditorium of the White House. “You’ll be able to fill out your name, Social Security number, date of birth, and contact information. No forms to upload. No special log-in to remember. It’s available in English and in Spanish, on desktop and mobile.”

Biden said the application will take “less than five minutes” to complete and will be a “game changer for millions of Americans,” noting that it took an “incredible amount of effort to get this website done in such a short time.”

Biden announced in August that he plans to cancel up to $10,000 in student loan debt for individuals making less than $125,000 a year, or as much as $20,000 for eligible borrowers who were also Pell Grant recipients.

An update on Sept. 29 states that borrowers who have federal student loans that are owned by private entities and not by the Department of Education will no longer qualify for the relief program.

Borrowers have until Dec. 31, 2023 to submit an application.

The White House said on Monday that over 8 million borrowers had already applied for loan forgiveness through the beta version of the website “without a glitch or any difficulty.”

“We had over 10,000 people contact the White House and be—either send us letters or calls thanking us,” Biden claimed.

His comment’s come as a number of Republican-led states and business groups filed a lawsuit against the loan forgiveness plan, which comes in the midst of soaring inflation, contesting that it is illegal.

Last week, the Job Creators Network Foundation Legal Action Fund, a small-business advocacy group, became the latest group to file suit against Biden’s plan, arguing that it is counterproductive, inflationary, and that it is in violation of the Administrative Procedure Act’s notice-and-comment procedures through which the administration should have sought the public’s input or comment on the program.

The legal challenges that have been brought against the president’s plan continue to mount.

Six Republican-led states — Arkansas, Iowa, Kansas, Missouri, Nebraska and South Carolina — are trying to block Biden’s plan, arguing that the president doesn’t have the power to issue nationwide debt relief without Congress. They’re also claiming that the policy would harm private companies that service some federal student loans by reducing their business.

A federal judge earlier this month dismissed The Brown County Taxpayers Association’s lawsuit against the Biden administration, finding it didn’t have standing to bring its challenge. -CNBC

According to Harvard Law professor Lawrence Tribe, the biggest obstacle for those seeking to challenge Biden’s plan is finding a plaintiff who can prove they’ve been harmed by the policy.

“Such injury is needed to establish what courts call ‘standing,’” said Tribe, who isn’t convinced that any of the current lawsuits pending against the policy have successfully done that.