Tesla Dumps 4% After Beating Earnings, Missing On Revenue And Margin 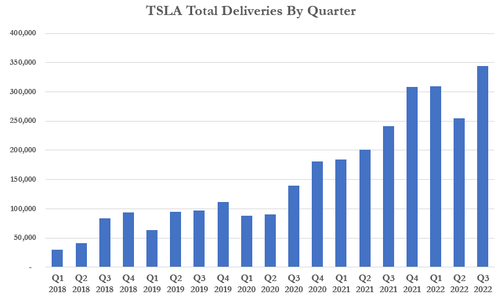 As previewed earlier, analysts are expecting Tesla to post earnings of $1 per share, down from $1.06 per share, and $22.1 billion in revenue, down from $22.7 billion. “Analysts are penciling in an operating profit of about $3.9 billion, compared with $4.1 billion earlier,”according to Barrons. Here is a convenient summary of what to expect:

The top questions for the company will be centered on demand. With extra production facilities coming online in the months prior to a global economic slowdown and increased competition, Wall Street will be looking for cues as to whether or not Tesla can remain competitive in the increasingly saturated EV space. Additionally, during today’s conference call, which Elon Musk has said he will be attending, investors will likely be looking for more details on:

The call comes following Tesla’s disappointing “AI Day”, in which it revealed its “Optimus” humanoid robot. While the sell side might still be sticking with Musk, AI and robotics professionals had a different take on the company’s robot reveal.

Investors will also be watching for mentions of Musk’s acquisition of Twitter, particularly how he plans to finance it. His initial loans to finance the deal this spring were leveraged in part against his Tesla shares, and now that the deal is all but certain, he’ll have to cough up the money. But the problem is that Tesla share price have fallen nearly 40% since the deal was announced. The banks that agreed to finance the deal six months ago did so during a very different lending environment. And while they’re looking for assurances from Musk, Tesla investors will want to be sure Musk’s bid for Twitter won’t be a distraction for Tesla’s management (especially with so much planned for 2023).

Additionally, we already know the company’s delivery numbers: recall, the automaker broke total delivery records for Q3, despite the fact that it missed expectations from Wall Street for the quarter. Tesla reported 343,830 deliveries for Q3 2022.

The company delivered 325,158 Model 3 and Model Y vehicles, and delivered 18,672 Model S and Model X vehicles. It blamed logistics for its miss of estimates and noted that a number of vehicles were “in transit”.

“Historically, our delivery volumes have skewed towards the end of each quarter due to regional batch building of cars.  As our production volumes continue to grow, it is becoming increasingly challenging to secure vehicle transportation capacity and at a reasonable cost during these peak logistics weeks,” the company wrote in its press release earlier this month.

Finally, there will be questions about TSLA’s woeful stock performance this year: the stock is down 37% in 2022, down almost 50% from the January highs, and is roughly flat for the quarter.

So with all that in mind, here are the numbers that Tesla just reported for Q3 (pdf link): 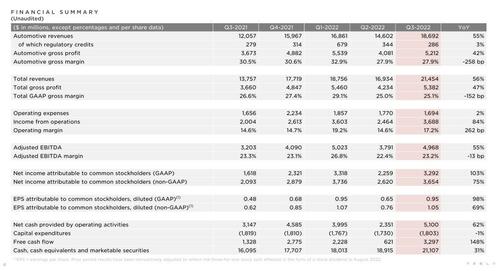 Some commentators were quick to dissect the earnings, noting that TSLA revs were light by a few %; the gross margin was light by ~50bps prob due to low Zev credit; the company underspent opex by on order of 300M so beat eps by .05; and while cash flow well ahead of street by 15-20%; ASPs were actually lower seq by ~4%.

Loup Ventures’ Gene Munster confirms that ASPs, or average selling prices, were lower than expected, which likely explains why they missed on revenue. “Tesla is a company that typically has been beating numbers, and the reaction your seeing is that people are a bit taken aback by the fact that they missed.”

Why this matters? because this is Tesla’s first revenue miss since Q3 2021. As for EPS, Tesla also hasn’t missed in a very long time. The last time adjusted profit fell short of estimates was in the fourth quarter of 2020.

This is how Tesla itself summarized its performance:

Another reason why the company revenues may have disappointed: TSLA sales of regulatory credits were $286 million for the quarter, lowest since 3Q 2021, and down sharply from the Q1 2022 high of $679 million. 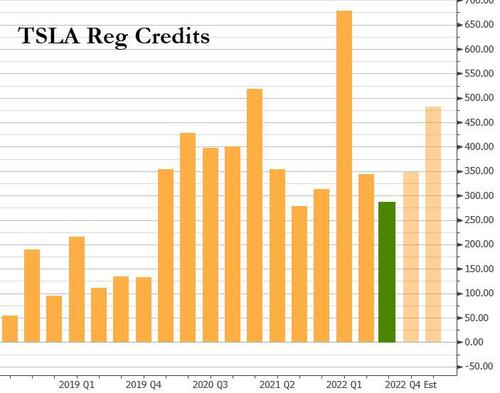 For those seeking more color on the supply-chain, this is notable: the company was quick to announce that it continues to believe “that battery supply-chain constraints will be the main limiting factor to EV market growth in the medium and long terms.”

Some other highlights from the report:

As noted above, and as will likely get much more attention during the conference call, Tesla said it continues to expect 50% average annual growth in vehicle deliveries over a “multi-year horizon,” but does not explicitly say it will hit that target this year. Needless to say, Tesla will need a big fourth quarter to hit that rate for 2022.

On the solar side, Tesla deployed 94 megawatts of solar last quarter. According to Bloomberg, that’s below its recent high of 106 megawatts achieved in 2Q, but is enough to keep it among US rooftop leaders.  On the other hand, total energy storage deployments increased by 62% YoY in Q3 to 2.1 GWh, the highest level we have ever achieved. 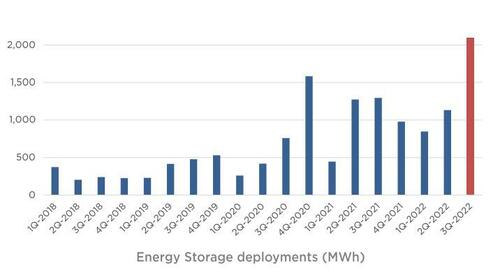 Tesla offered this context for its record-high storage deployments:

“This level of growth was accomplished despite semiconductor challenges continuing to have a greater impact on our Energy business than our Automotive business. Demand for our storage products remains in excess of our ability to supply.”

It also said that it is in the process of ramping production at our dedicated 40 GWh Megapack factory in Lathrop, California to address the growing demand.”

In kneejerk reaction, the stock first pumped as investors saw the EPS beat first, then dumped as attention turned to the revenue and margin misses, and at last check was down 4%, if quite volatile and illiquid, after hours. It is certainly possible that the earnings call can reverse all the after hours weakness. 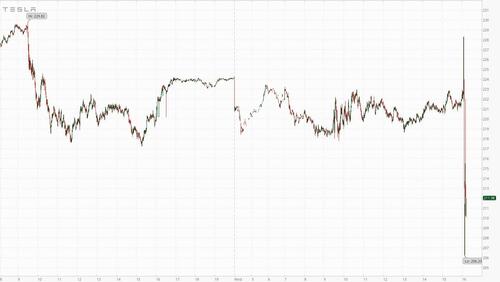 Tesla’s weakness has hit other electric vehicle stocks as well, with Rivian, Lucid, Nikola and Fisker all trading lower postmarket.