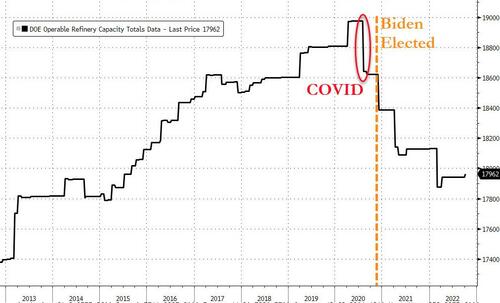 President Biden is set to deliver his much-leaked and barely-anticipated address explaining his “Additional Actions To Strengthen Energy Security and Lower Costs”:

His cunning new plan, we hear you ask?

However, as we have noted too many times to remember, the problem is not a lack of crude oil but a lack of refining capacity…

“U.S. policy pushing away from oil consumption has led to refinery transitions to renewables, or outright closures. This trend accelerated during the COVID-19 pandemic,” and then accelerated further upon Biden’s inauguration.

Since President Biden has been in The White House, 230mm barrels of crude have been drained from the SPR and gasoline prices for the average American are up $1.66… 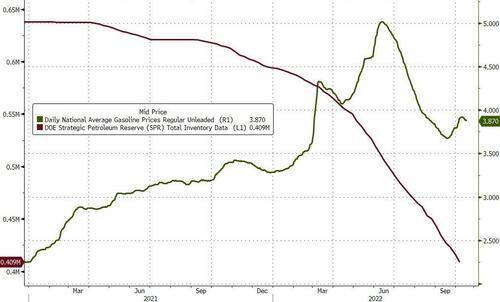 Finally, it is worth noting that crude oil and wholesale gasoline prices are up around 2% on the day as he announces this cunning plan… 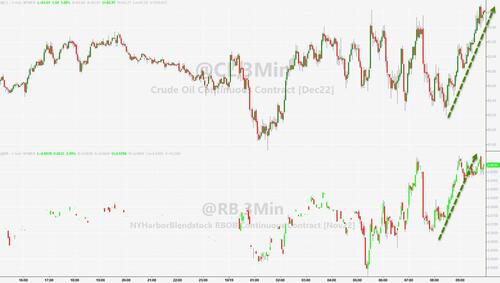 … while “inviting” oil producers to pump more because the Biden admin has promised it would buy some? all? no? oil at $67-$72 to refill the same SPR it is actively draining right now, not to be confused with the $80 price floor floated just one month ago…

now why on earth would oil industry not trust the white house? pic.twitter.com/epQWEXRzxb

… ignoring the fact that if and when oil is tumbling to $67, the White House will have finally achieved its goal of sparking a crushing global recession and amid the millions of layoffs that last thing on its mind will be to refill the SPR, JPM has done some math on what the latest proposal actually means for oil.

Below we excerpt from the latest note by JPM head energy strategist Natasha Kaneva (available to pro subs in the usual place):

The US administration still has ability to use strategic petroleum reserves over the coming weeks and months as needed to fight high petroleum prices. The Biden administration has overseen the release of nearly a third of what had been over 600 million barrels in the federal government’s strategic petroleum reserves as of last November—a move that continues to be a major source of incremental supply and that has undoubtedly helped alleviate surging energy prices. Prior to the OPEC+ decision on October 5, emergency drawdowns from the US SPR were set to stop after October, given the expectations that US domestic crude oil production would have increased enough to replace SPR barrels 1:1 in volume terms.

The administration is now signaling that the remaining emergency sales of 25 million barrels (of the original 180 million) could be delivered in 4Q22, with 10-15 million barrels already confirmed for November and the final 15 million barrels likely to be sold and delivered in December. Additionally, 26 million barrels of congressionally-mandated sales required in financial year 2023 that runs from October 2022 through September 2023 could also be pulled forward for year-end 2022 delivery. This would allow the DOE to maintain 4Q22 SPR deliveries at the same rate that they have been averaging for the past six months (Exhibit 3). Any additional releases above this level would require President Biden to declare another severe energy supply interruption or conduct another Exchange transaction. 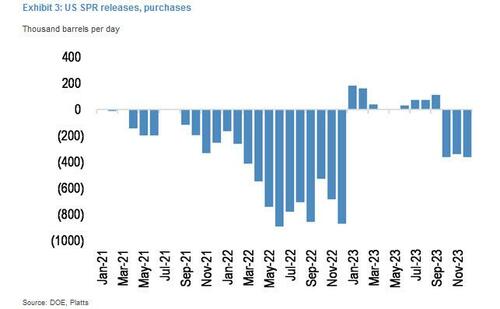 If both emergency and congressionally-mandated SPR releases are pulled forward to 4Q22, then the ending crude oil stocks will exit the year at 348 million barrels, the lowest since July 1983 (Exhibit 4). 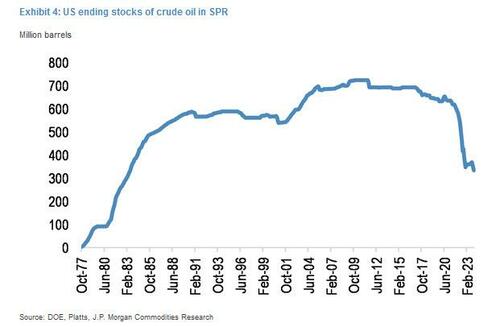 What if that’s still not enough for Biden and the market actually goes on to send oil and gas prices sharply higher as it starts discounting the failure of the SPR drain strategy? Well, there is another fallback plan, one which would lead to even higher prices in the long-term but would lower them for at least a few weeks: export bans. Here is JPM again.

A spike in fuel prices ahead of midterm elections on November 8th could also increase consideration of restrictions on US exports of refined petroleum products, a controversial idea that has been gaining traction in some parts of the Biden administration. The Energy Department has been arguing that fuel could be better used to fill domestic US inventories, which are below seasonal averages. In August, Energy Secretary Granholm sent a letter to seven US refiners urging them to increase US product inventories or risk “emergency measures”, a warning repeated in a late September virtual meeting about energy prices, where she confirmed the administration has not ruled out a US fuel export ban. The White House has asked the US Energy Department to analyze the possible impact of a ban and the State Department is also reviewing the option.

In a sign that the oil industry is becoming increasingly concerned the administration could move ahead with the export ban, the American Petroleum Institute and the American Fuel and Petrochemical Manufacturers sent a joint letter to the Energy Secretary urging to take the option off the table.

We reiterate our view that a ban on fuel exports would likely raise gasoline prices for the average American driver and would certainly raise all fuel prices for Europe, and especially Latin America. From the US’s approximately 18 mbd of refining capacity, about 3.6 mbd of refined oil products were exported in the first seven months of the year, with diesel comprising 35% of sales, or 1.2 mbd. Almost all (1.1 mbd) of the distillate exports went to Latin America, US’s primary export market (Exhibit 5). Gasoline accounted for about a quarter of total US oil product exports, amounting to 835 kbd.

The US Gulf Coast, the main US refining center, exported 790 kbd of gasoline and about 1.1 mbd of diesel, almost all of that to Latin American countries like Mexico, Brazil, Chile and Argentina (Exhibit 6). The US East Coast does not have enough refining capacity and to meet its regional fuel demand it usually imports an average 500-700 kbd of gasoline from Europe and about 250 kbd of diesel, primarily from Europe and the Middle East. There is no readily available or economic way to transport Gulf products to the US West Coast, which sources its imports from Asia. 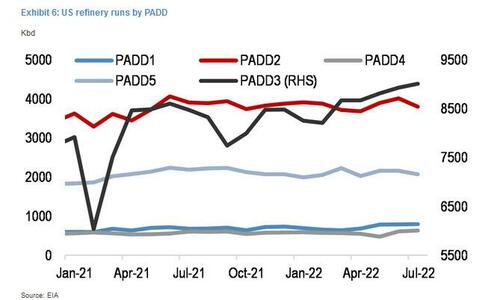 Under a ban scenario, while nearly all of the US Gulf Coast gasoline export flows could shift to find a home on the East Coast (assuming sufficient Jones Act vessel capacity and accompanying Jones Act waivers), excess diesel production would have nowhere to go outside of domestic storage. In that scenario, US Gulf Coast diesel prices would need to fall until they were low enough to force refiners to cut runs. Because diesel only makes up about a third of the yield for US refiners, that cut in runs would need to be nearly three times greater than the 1 mbd of excess diesel supply and could remove as much as 1.5 mbd of gasoline supply from the global market. In turn, the loss of trapped refinery production in the Gulf Coast would likely strand a surplus of crude oil in the Central US, halting upstream energy production.

There would be some room for refiners to cut runs and shift yields toward gasoline, but, even if refiners max out gasoline yields, they would still need to cut runs significantly to avoid oversupplying the diesel market. Under a wholesale ban of US fuel exports, diesel prices in the US would likely be much lower initially; US gasoline prices would likely be the same or higher, and much higher in Latin America and the rest of the world.

However, a temporary (30 to 60 days) ban focused only on gasoline and blending components exports could be more effective. If refiners could still export diesel and other products, they could shift US Gulf Coast gasoline flows from Latin America to the US East Coast. This, combined with broad Jones Act waivers, could potentially lower fuel prices on the US East Coast.

Translation: while the SPR drain is bad, a refined fuel export ban would be catastrophic. The good news- for now – is that as US energy security adviser Amos Hochstein told Bloomberg TV today, “several tools are on the table, but a ban on fuel exports is not “what we are announcing today or anytime in the very near future.”

Of course, that and and probably will quickly change the moment gas prices spike because as National Economic Council Director Brian Deese also told Bloomberg TV when asked if the administration might ban oil exports to ease prices, “at this moment when we have uncertainty and uncertainty for American consumers, we have to keep all options on the table” adding that President Biden will continue to assess the market, tools available and their impact.

In short, judging by the total chaos, it now appears that none other than Burisma energy guru Hunter Biden is in charge of US energy policy… 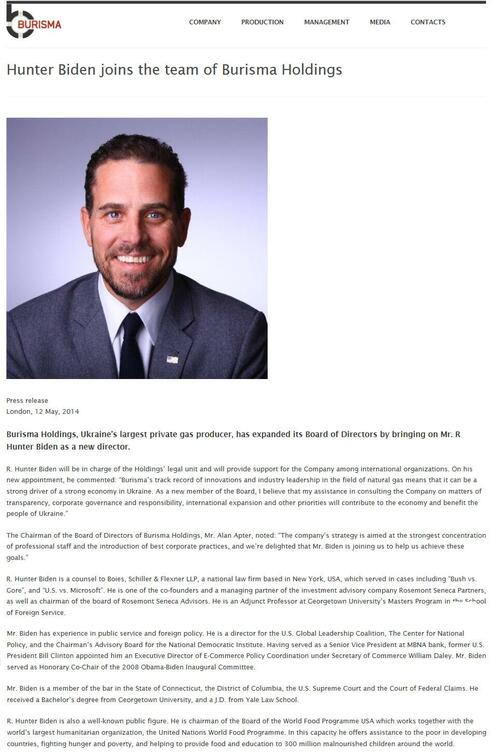