When Money Is Untethered From Reality, You Wind-Up In Clown-World 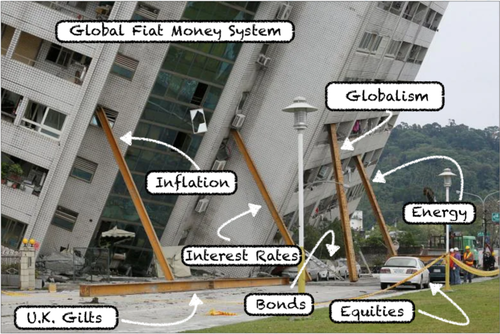 Authored by Mark Jeftovic via BombThrower.com,

When Whiteboard Economics Collides With Reality.

Lately I’ve been drilling down on the difference between Proof-of-Work and Proof-of-Stake. Why does it matter?

I used to think it didn’t matter too much. My view toward the entire burgeoning asset class of crypto was “let a thousand flowers bloom”. I still think that way to some extent. If you want a proof-of-stake system for an application, a game or a project token, be my guest. It works in some circumstances.

But as a base layer for sound money, it’s an abomination. The reason why has been articulated in innumerable places, but it recent times it was George Gilder who really nailed it in The Scandal of Money: Why Wall Street Recovers but the Economy Never Does. The book unpacks the consequences of untethering money from solid anchors to reality:

“With no [hard] dollar anchor for long-term investment, financial horizons shrank and markets dissolved into trading over bets on bits….The collapse of productivity growth after 1972 must be deemed just another of the cascading effects of the destruction of money as a metric”.

He was talking about high time preferences, as do a lot of the Bitcoiners. What exactly the consequences of untethered money and shrinking “investment” horizons would mean when it became systemic,  saturating all avenues of traditional finance conventional economic thinking.

“[Where there are] no limits to the tempests of short-term trading and trafficking in a surf of meaningless money values.”

This expression of short term trading within meaningless monetary values found no greater expression than during the blow off top of The Everything Bubble that occurred under lockdowns, stimmies, SPACs, meme stocks, Davie Daytrader, and even crypto moonshots like LUNA and NFTs. Possibly the best phrase I’ve heard for it was Hidden Force’s Demetri Kofinas’ term, “financial nihilism”.

That’s what you get when you untether money from any foundational anchor to the real world.

The decision (top down, non-consensus driven) to move to PoS on Ethereum’s part, to solve a largely non-existent energy consumption problem, got me thinking about this and researching it a lot more.

Whereas because Proof-of-Stake is virtualized in this way, it’s really cool, you get to create a simulated universe that has its own laws of physics. And that just gives us protocol developers a lot more freedom to optimize the system to give us all of the security properties that we want.

If we want the system to offer a certain security guarantee, that means we can modify the system in way that lets us achieve it.”

Buterin is making our point for us, without realizing he’s making our point for us. He is expressing the ultimate technocratic fantasy: the ability for managerial experts from on high to reorder reality according their own whims and priorities. Where models can be created on whiteboards and reality is expected to conform to these models. It never does, yet we live in a world where people who point out that the models are flawed are demonized while those who bear no consequences for being wrong, double down and are awarded Nobel Prizes.

But when whiteboard economics inevitably collides with reality – those pesky laws of physics – the models never hold up. Reality intervenes, and the modellers either double-down or create some new set of policy responses to “fix” the latest , self-induced, crisis.

The economic and societal chaos we are in the early innings of experiencing today is a direct result of iterative cycles of “money” being detached from the laws of physics, a.k.a. reality.

This is why we can’t have nice things.

In order to regain a tether to reality, we need a monetary hard asset that can’t be arbitrarily modified by anybody, let alone a nation state, central banks, Klaus Schwab, PayPal, big tech in general, or a pyjama boy with a hard-on for virtual reality.

It’s that anchor to reality, to the laws of physics, that make Proof-of-Work such a breakthrough innovation. At the risk of expending too much airtime on it here in the portfolio update, I will direct you to two episodes of The Investors’ Podcast network with Preston Pysh:

It’s over two hours long and it takes Lowery a long time to lay the foundation for his case. Hang in there. Once he squares the circle you’ll get it. When I finished this episode it gave me absolute clarity on why this is such a fundamental issue and why Proof-of-Work is an unassailable and superior innovation vs. Proof-of-Stake in every way. At least it is when you want to create a base layer for sound money.

Saylor extends the understanding in this interview, especially where it comes down to the difference between securities (Ethereum) and commodities (Bitcoin), and why this is such a big deal. The conversation then moves into why the anchor to physics is a feature, not a bug.

The interview helps reconnect us to the reality that energy usage (or cost inputs) to build something useful are necessary, not evil. In Ethereum’s case, the impetus for the merge was to reduce its power consumption. Why?

In last month’s letter I did some back-of-the-napkin calculations showing that Ethereum’s total power consumption worldwide was about 2/3’s the total consumption of US electrical vehicle deployment. Why is it A Bad Thing™ when you use the energy to run an ostensibly distributed, universal Turing-complete super-computer under Proof-of-Work, but then it’s celebrated as a milestone when you use even more energy to run a bunch of EVs  – which end up being charged by coal and built with lithium and cobalt sourced from child labour?

95% coal, actually. Love this clip. “The elEctrIcitY cOmeS fRoM iNsIde tHe bUIldiNg!” https://t.co/hP2dgHn32e

People seem to be clamouring for this, we’ll see how they like it when CBDCs finally show up with Personal Carbon Allowances baked right into their wallets.

Bitcoin is the most viable base layer today for re-attaching money to reality. It does that through Proof-of-Work, not in spite of it. We already know that total Bitcoin energy usage worldwide is less than tumble dryers, and that Bitcoin mining is incentivized to use waste, renewable and stranded power sources. It’s the tie between energy input and digital output that tethers the base layer to the laws of physics, which is out here in real world, where (everybody outside of the pod), spends their everyday existence.

Without that tether, we eventually wind up in a clown world where central bankers get Nobels for blowing up the financial system, where climate alarmists want to end oil on one hand yet advocate for nuclear warfare on the other.