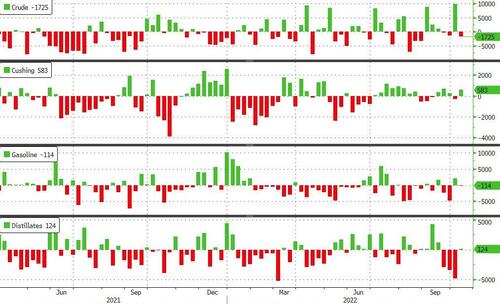 Despite an overnight dump’n’pump, oil prices are higher this morning as continued US efforts to curb prices and concerns over a global recession battle signs of tight supply (and an unexpected draw reported by API last night).

“Liquidity and risk deployment is low and investor positioning has been subdued,” RBC Capital Markets analysts including Michael Tran and Helima Croft said in a note to clients.

“Global inventories remain tight, but the global macro backdrop is arguably the weakest in a decade.”

This morning’s official data should give us another glimpse at both the supply and demand side of the equation (and the effects of Hurricane Ian have largely left the data).

After the prior week’s massive crude build, last week saw a small draw (though bigger than expected). Cushing saw stocks rise (somewhat expected with US refiners still in seasonal turnaround mode) and on the product side, inventory changes were minimal…

As Bloomberg reports, the bigger-than-expected draw in commercial crude stockpiles was boosted by another 3.6 million barrels taken from the Strategic Petroleum Reserve. That raised the overall nationwide crude draw to 5.3 million barrels in the week to Oct. 14. 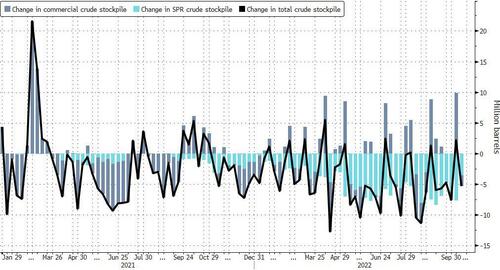 The previous week’s build in nationwide crude stockpiles was short-lived. 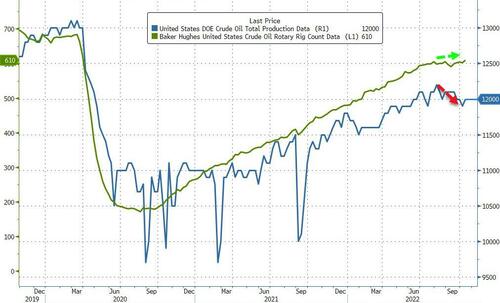 WTI was hovering around $83.40 ahead of the official data and slid lower after… 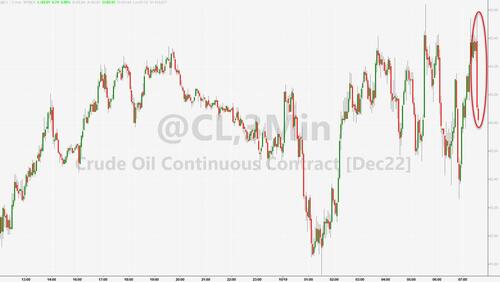 Bloomberg notes that East Coast diesel inventories are precariously low at the start of the heating season, and spiking prices are hurting consumers in the Northeast who are stocking up on fuel to power home furnaces. Less visible is the cost embedded in everyday goods, the vast majority of which move on diesel-powered trucks and trains. That means expensive diesel has the potential to drive inflation in a more insidious way than gasoline has.

Diesel crack spreads continue to surge, but its gap to gasoline may keep widening as the latter is oversupplied globally… 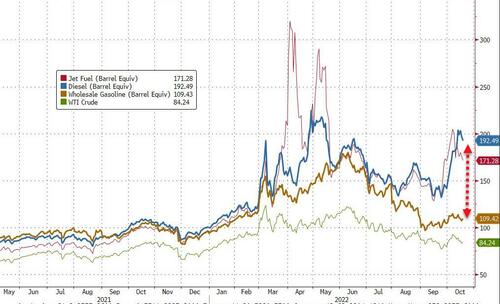 Bloomberg Intelligence’s Valle concludes: “Economic headwinds are set to challenge oil prices for the rest of the year, while supply tightness could push Brent and WTI near $100 a barrel in 1Q23. The dearth of diesel and natural gas in Europe will eventually support refining demand, and consequently crude, as US shale growth slows and there’s a lack of available crude-oil supply globally.”

Which is likely why, as we detailed last night, all eyes today will be on President Biden’s address to the nation at 1315ET to explain his cunning new plan (same as the old plan) to cut US gasoline prices by draining the SPR.