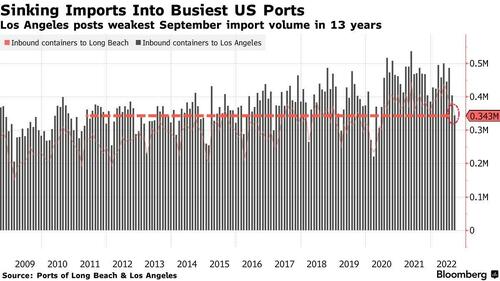 The inventory glut, i.e., the reverse bullwhip effect, is on full display at the nation’s largest containerized port as cargo volumes slump during what is supposed to be the busiest shipping period of the season. There are also reports the trucking industry could suffer the worst decline since 2008 in the first quarter of 2023.

Let’s start by highlighting the inventory glut that we predicted in May has collapsed trans-Pacific shipping container rates as US imports of goods from Asia lose steam. Retailers are canceling overseas orders, forcing freight companies to reduce sails. A lot of this has to do with importers ordering too many items popular during the pandemic, such as televisions, computers, fancy exercise bikes, and other electronics, while consumers abruptly changed their spending habits to services, such as restaurants, earlier this year, leaving retailers with a record amount of inventory.

Gene Seroka, executive director at the Port of Los Angeles, told Bloomberg that cargo volumes declined for a second month in September. He said the outlook for the remainder of the year will be “soft.”

Seroka said the top containerized port in the country handled 709,873 twenty-foot equivalent containers last month, down 22% from the same month a year ago and the lowest amount for September in seven years. He noted volumes are so far down 4% from last year’s record-setting levels.

Inbound containers to both the Port of Los Angeles and the neighboring Port of Long Beach slid 26.6% last month from a year earlier to 343,462 containers — the lowest level since GFC in 2009.

The slowdown is happening at an unusual time because this is considered peak shipping season, as retailers build inventories for the year’s biggest shopping season. But not this year, as the reverse bullwhip effect crushes the freight industry.

Seroka blamed the cargo slowdown on:

“The upside: consumer hesitancy and abundant retailer inventories could lead to merchandise markdowns ahead of the holiday season.” 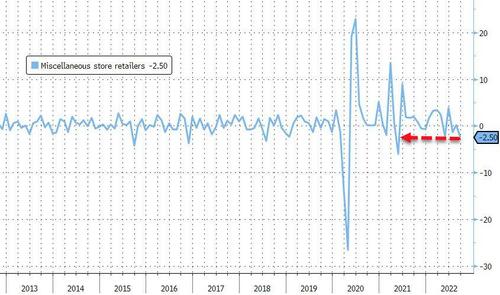 … and data from Morgan Stanley shows ordering by 100 corporations reached the lowest point in the survey’s 12-year history. 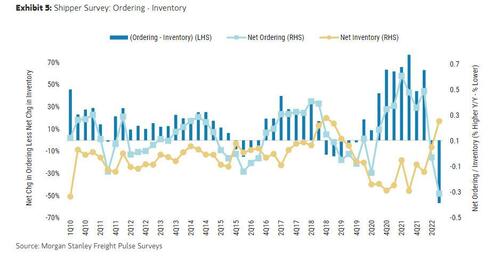 The silver lining is supply chain stress is rapid easing, as explained by Liz Ann Sonders, the chief investment strategist at Charles Schwab:

The slowdown is spreading to the trucking industry. FreightWaves CEO Craig Fuller warned the worst trucking downturn since GFC is ahead.

A CEO of a very large trucking software firm with decades of experience told me today that “Q1 could be the worst quarter in trucking since 2008.”