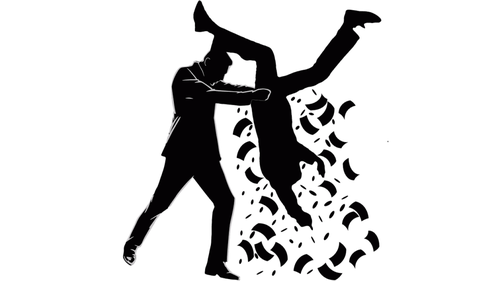 The US government is rolling in dough!

US tax receipts have surged this year. Through August, the US Treasury had collected over $4.4 trillion in revenue for fiscal 2022 with one month left to go. That was already 10% higher than receipts in 2021. The US government took in $303.73 billion in August alone. That was up 23% from August 2021.

According to a Tax Foundation analysis of Congressional Budget Office data, federal tax collections were up 21% in the 2022 fiscal year that ended on Sept. 30.

The US government isn’t just making a windfall in absolute terms. Tax collection is at a multi-decade high of 19.6% as a share of GDP. That is up from 17.9% in fiscal 2021 and is approaching the last peak of 20% set during the dot-com bubble in FY 2000.

Besides the dot-com bubble, federal tax receipts have only represented a higher share of GDP in two other years, both during World War II. In 1943, federal tax collections reached 20.5% of GDP before falling to 19.9% in 1944.

Compared to average federal tax collections in the post-war era of 17.2% of GDP, 2022 collections are set to exceed that level by 2.4 percentage points. 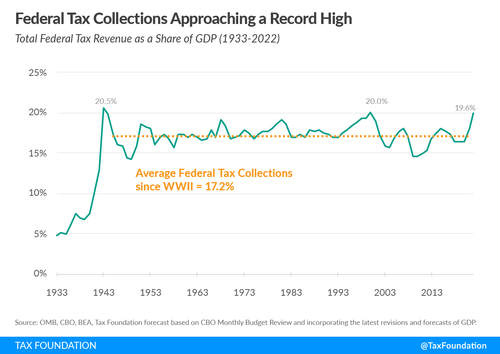 Individual income tax collections surged the most, up 29% from $2.0 trillion last year to $2.6 trillion this year.

This raises a question: if the government is taking in near-record levels of taxes, how is it running massive deficits month after month?

The answer is simple: Uncle Sam has a spending problem.

History shows that over a long period of time government will spend whatever the tax system raises plus as much more as it can get away with. That’s why we’ve had universal deficits.”

The US government has spent money at roughly a half-trillion per month clip all year. In August, Uncle Sam blew through another $523.3 billion. This brought total spending for fiscal 2022 to just over $5.35 trillion.

This is how the federal government managed to push the national debt above $31 trillion even as it filled its coffers with tax money.

And there is more spending coming down the pike.

The US government is still handing out COVID stimulus and it wants more.  Congress recently pushed through another massive spending bill. Meanwhile, the US continues to shower money on Ukraine and other countries around the world. And we haven’t begun to see the impact of student loan forgiveness.

According to the Committee for a Responsible Federal Budget, policies enacted by the Biden administration will add more than $4.8 trillion to deficits between 2021 and 2031.

On top of increased spending, rising interest rates will balloon the debt even more.

There’s more bad news for the feds. The tax windfall isn’t likely to last. The CBO expects this revenue surge to wane.

Individual income tax receipts are projected to decline as a share of GDP over the next few years because of the expected dissipation of some of the factors that caused their recent surge. For example, realizations of capital gains (profits from selling assets that have appreciated) are projected to decline from the high levels of the past two years to a more typical level relative to GDP. Subsequently, from 2025 to 2027, individual income tax receipts are projected to rise sharply because of changes to tax rules set to occur at the end of calendar year 2025. After 2027, those receipts remain at or slightly below the 2027 level relative to GDP.”

As the economy spins deeper into a recession as the Fed tightens monetary policy to fight raging inflation, you can expect revenue to tank further, meaning even bigger budget shortfalls.