Circle K To Start Selling Marijuana At Its Florida Stores 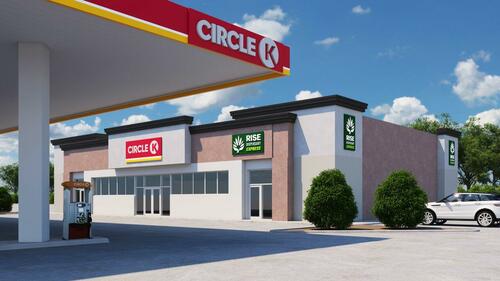 In another big step along America’s path to normalizing the use of a once-taboo plant, major convenience-store chain Circle K will begin selling marijuana at its Florida gas stations.

Circle K’s foray into the marijuana business will go live in 2023, through a partnership with Chicago-based Green Thumb Industries, a medical and recreational cannabis wholesaler and retailer with a presence in 15 states. Florida’s marijuana market is the country’s second largest, trailing only California.

“The new RISE Express model is a huge step forward in making it easier and more efficient for patients to purchase high-quality cannabis as part of their everyday routine when stopping by their local convenience store.”

Circle K parent Couche-Tard is a global pioneer. “Legal marijuana has so far been sold only in stand-alone dispensaries in the US and within pharmacies in countries such as Uruguay and Germany,” reports Bloomberg. Couche-Tard also has a Canadian convenience-store cannabis pilot with Fire & Flower.

Under the arrangement, Green Thumb will operate “RISE Express” stores that will be partitioned from the convenience stores and have separate entrances. Since Florida law only allows medical use, there will be no recreational sales. There are many conditions and symptoms that can qualify Floridians to receive a medical marijuana card, and some 700,000 residents have been issued one.

With more than 7,000 Circle K stores in 47 states, Circle K is the largest independent convenience store operator in the United States. Green Thumb’s Kovler “there’s appetite” at Circle K to try the model outside Florida too.

The news comes a few weeks after President Biden ordered an “expeditious” review of how marijuana is scheduled under the Controlled Substances Act. It’s currently in the same category as heroin, LSD and ecstasy.

Meanwhile, a new Morning Consult/Politico survey finds 60% of Americans support legalization, including a 47% plurality of Republicans.

In our new survey, 60% of U.S. voters say #marijuana use should be made legal in the United States, compared with 27% who say it should not be. https://t.co/JFsd013Xjz pic.twitter.com/lVAFnak989

With a major, mainstream brand now entering the marijuana business, look for the country’s wasteful and destructive prohibition regime to continue crumbling.