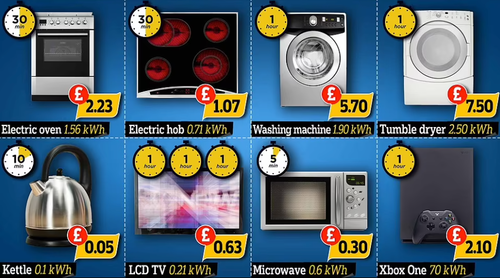 The National Grid warned Britons of winter power blackouts earlier this month if it can’t import enough natural gas and electricity from other parts of Europe. According to Daily Mail, the grid operator developed a new scheme to prevent the worst-case scenario of power outages by offering households equipped with smart meters to turn off appliances during peak demand times.

National Grid’s scheme pays households up to £20 per day if they don’t use energy-intensive appliances, such as electric ovens and stoves, washing machines, tumble dryers, televisions, microwaves, and even video game consoles, between 4 pm and 7 pm or 2 pm until 9 pm over the next five months.

They will be advised to use washing machines, tumble dryers, ovens, dishwashers and other appliances outside those periods so boffins can measure how much energy is saved on the grid when it is at its busiest. If the entire proposed £3 per kwh rebate if passed on to Britons by their supplier, over five months this could mean around £240 off their bills in total. –Daily Mail

The grid operator hopes the ‘demand flexibility service’ will save 2GW of electricity — equivalent to powering 1 million homes — during peak demand hours to thwart supply and demand imbalances that could result in power rationing.

“But the scheme relies on users having a controversial smart meter, a device which automatically transmits your energy usage to your provider,” Daily Mail said.

Remember in the US, over the summer, when households in Colorado could not control their own smart thermostats after the local power company digitally seized them to prevent people from increasing cooling demand during a heatwave. There are risks when using anything smart.

This winter could be reminiscent of power outages experienced in the 1970s across the UK if power generators cannot get enough NatGas to operate.

Ahead of the cold season, we’ve pointed out that European households have returned to burning wood, coal, and even trash to heat their homes. Western sanctions against Moscow are backfiring and risk sending tens of millions of Europeans not just into energy poverty but back a couple of centuries in progress. Thank you, NATO.