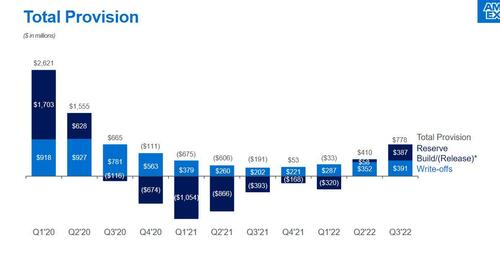 Investors may have been ok with banks reporting a jump in bad loan provisions, but when it comes to credit card companies, they are in full-blown “Death Con 3” mode.

On Friday, American Express – which traditionally targets the upper classes of US society – tumbled the most in four months after the credit card processing giant set aside much more for bad loans than analysts expected, suggesting the fastest ever surge in interest rates is adversely impacting customers’ ability to pay their bills.

Provisions for souring loans were $778 million in the quarter, worse than the $573 million analysts in a Bloomberg survey were expecting, and the most since Q2 2022 when the US economy was still in lockdown due to covid. The move should probably not have come as a surprise after AmEx warned investors for months that charge-offs would rise as consumers begin borrowing more in the wake of the pandemic. The net write-off rate jumped to 1.1% from 0.8% a year ago.

“They’re just reverting to somewhat higher levels, exactly as we would have expected,” Chief Financial Officer Jeff Campbell said in an interview.

The unexpected surge in bad loans came even as the company reported another quarter of year-over-year spending growth and strong credit performance, not to mention an impressive 24% increase in year-over-year revenue growth: the net write-off rate on card-member loans was unchanged from the second quarter, and the rate of card-member loan payments 30-plus-days past due was up to 0.9% from 0.7%. They remain better than many other card-lenders’ metrics, even at big banks that also tend toward an affluent customer base.

There was more good news: while additional provisions crimped profits, earnings per share still topped estimates. AmEx said it added a record number of Platinum customers in the third quarter, pushing revenue up 24% to an all-time high and prompting executives to boost their profit forecast. The credit-card giant said it now expects per-share profit will be above the $9.25 to $9.65 range it previously expected.

According to the company, Millennial and Gen Z-aged consumers were more than 60% of new proprietary card acquisitions in the quarter. It said that without giving them the option of using revolving debt, that group may have started out with a competitor’s card before later turning to a higher-fee, higher-reward Amex charge card. And these are good customers: Millennial and Gen-Z U.S. consumer spending grew nearly 40% year-over-year in the third quarter, almost twice the rate of Gen X and more than triple the rate of baby boomers.

For now, AmEx and its rivals are benefiting from historically high prices. That’s because the firm takes a slice of the purchase price each time a consumer uses one of its cards at checkout. But investors are concerned that the Federal Reserve’s efforts to raise interest rates and tamp down inflation may spark a recession and lead to higher card losses even as overall card volumes crater.

So far though, as the WSJ notes, credit is the dog that has not yet barked, especially for higher-income consumers. But when even the premium spender-targeting AmEx warns that the dam is starting to crack, not even the NBER will be able to avoid the reality of US recession.