“There Is Too Much Debt In The World, So They Must Inflate It Away, Which They Will. That’s The Only Thing You Need To Know” 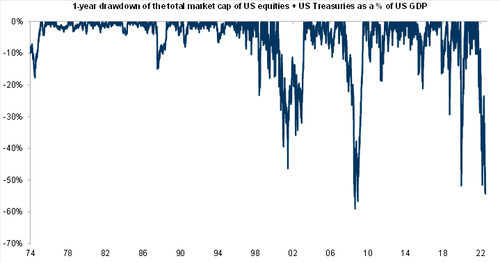 By Eric Peters, CIO of One River Asset Management

“Investors are beginning to come to terms with the fact that many things they believed to be true are myths,” said Sasquatch, his already enormous market footprint having deepened markedly post-pandemic. “They assumed the 60/40 portfolio was robust, and sometimes it is, but other times it is not,” he said, winding our way through the streets of London, crooked, cracked cobblestones in his footsteps. “They assumed inflation would remain low forever, expectations too. That TIPS hedge inflation. Tech outperforms. It turns out these things are not always true.”

“Real estate, it turns out, is not always a hedge for inflation. Nor is gold. And before this cycle is over, investors will discover things they believed to be true about infrastructure, private equity, and a variety of illiquid investments are also just assumptions,” continued Sasquatch, CEO of one of the world’s largest investment firms, his returns surging. “The portfolio adjustments required are dramatic, and clients need help solving such problems, so it’s unsurprising that our solutions business, like yours, is seeing strong inflows.”

“Well it’s obvious isn’t it,” he asked, answering rhetorically, dismissive of my question, almost irritated, which made me laugh. We’d spent a couple hours together and had finally gotten onto markets. “Well, isn’t it?” he repeated, louder. I’d asked what he thinks is the most important thing to focus on. He’s one of the greatest CIOs of our generation, and keeps his macro trades liquid, his risk management tight. “There is too much debt in the world, so they must inflate it away, which they can do. They will. That’s the only thing you need to know.”

“Well, we have gotten the inflation we last discussed,” said the Viking, leading tactical asset allocation for one of the mighty Scandinavian pools of assets. I had last visited pre-pandemic, when we had agreed that whenever the next recession arrived, it would spark an aggressive fiscal stimulus, and catapult us into a new inflationary regime. “But the firms that believed their commercial real estate investments would insulate them from this, have not done too well with that I think,” he continued, a beautiful turn of Swedish understatement.

“If you look at listed commercial real estate companies here on our stock exchange – which is overall down 35% – you find that these names are down 60-80%,” said the same Viking. “Still, you must also consider that inflation has risen by 10% which is a real loss, and the kronor is down 20% against the dollar too.” Stockholm itself was as magnificent as ever, cold but clear, leaves turning. But invisible, its highly leveraged financial architecture sagged, groaned, like everywhere. “And we have not yet seen the private markets marked lower really.”

“We are 200% funded,” said the chief risk officer for one of the largest private pension plans. “What does that mean?” I asked. “We have twice as many assets as liabilities,” he said, patiently. “Ah, apologies. I am just used to US pensions which in some cases are just 40% funded. I haven’t ever heard of 200%. How are you so well-funded?” I asked. “Good investing, I think, perhaps some good luck too,” he said, smiling. “And so you are well-positioned for the coming distressed selling, by your poorly funded and leveraged peers?” I asked. He smiled.

“How do we invest for this new environment?” asked a CIO in Stockholm. “I don’t yet know what you currently own, so that’s hard to answer,” I said. “But in general, I think we should all re-underwrite what has worked for the past couple decades of low inflation, low interest rates, financialization, mean-reversion, leverage, globalization, and peace. Ask how such strategies will perform as these dynamics reverse. Ask how your strategies will fare in a long period of financial repression, where central banks inflate away government debt.”

“Re-underwriting is hard, because we are all anchored to what has been, and the future will look very different,” I continued. “To capitalize on new opportunities and insulate yourself from risks, you’ll need to be quite open-minded. My all-in commitment to digital assets reflects this embrace of change. And systematic trend-following strategies are a highly effective way to capitalize on quantum change in traditional markets. That change has only just started. We combine trend-following with volatility trading. These were unloved strategies for the past decade. I think strategies that struggled then will now work well for years. And vice versa.”