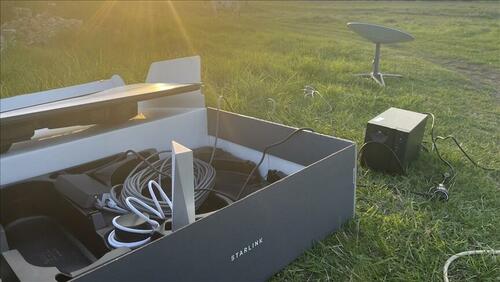 After being caught on up in earlier controversy and pushback over his Russia-Ukraine peace proposal, resulting in a back-and-forth with the Pentagon over the status of public funding for SpaceX’s satellite internet service Starlink, Elon Musk on Sunday made a new pledge seeking to reassure Ukraine.

“Before [the Department of Defense] even came back with an answer, I told @FedorovMykhailo that SpaceX would not turn off Starlink even if DoD refused to provide funding,” Musk stated in a Sunday evening tweet, referring to Ukraine’s vice prime minister and minister of digital transformation Mykhailo Fedorov.

The new pledge to not “turn off” the Starlink services used by Ukrainian troops means that even if the US Department of Defense ultimately refuses to share the bill, Musk will personally ensure it stays on.

The Register reported of the controversy that “The Starlink-Ukraine honeymoon period appears to be at an end: SpaceX reportedly wants the US to begin picking up the tab for more of its war-zone services.” Musk has said SpaceX already forked over $80 million in costs to keep the internet systems operating, which the Ukrainian government has long acknowledged as crucial to its military operations and communications.

This public promise comes also as some hawkish pundits have begun to float the idea of nationalizing the Starlink systems. This is precisely what Former George W. Bush speechwriter and columnist for The Atlantic David Frum argued last week:

Frum argued on Monday that it is becoming too “unwise” to suspect that Musk will continue to provide Starlink satellite equipment to help Ukrainian citizens access the internet during Russia’s invasion of the country. To remedy this, he suggested the U.S. government should seize and nationalize the company if Musk ever plans to pull his satellites.

Frum had tweeted “It was always unreasonable, and is becoming unwise, to expect @elonmusk to provide Internet to Ukraine for free forever. Western allies should pay. And US should have a plan ready to nationalize Starlink fast if Musk cuts off Ukraine’s connection to advance his political agenda.”

Socialism comes at you fast.

From a former conservative. https://t.co/6lbkXhs3LJ

In September, SpaceX’s director of government sales spelled out in a letter to the Pentagon that “We are not in a position to further donate terminals to Ukraine, or fund the existing terminals for an indefinite period of time.”

It’s expected that by year’s end SpaceX will have eaten through $100 million for the donated 25,000 Starlink terminals so that Ukraine can continue using the services. Ukraine’s government has lately “played nice”, expressing its gratitude – for example in this Sunday exchange with Musk:

“Before all the talks about funding, you confirmed to me that in any case, you will ensure the work of Starlink in Ukraine. This was critically important for Ukraine,” Mykhailo wrote.

Mykhailo had previously thanked SpaceX while declaring that “Ukraine will stay connected no matter what.”

Interestingly as part of the same thread, on Monday Musk indicated he would be donating more Starlink terminals for use in Iran amid ongoing anti-government protests and efforts by authorities to restrict internet and social media access…

Musk has of late come under greater media and even possible government scrutiny for unfounded allegations that he’s been in direct contact with the Kremlin, a charge he’s rejected as patently false. This merely because he has sought ways that the warring sides in Ukraine might compromise toward ceasefire and negotiated settlement, as opposed to escalation to the point of nuclear armed powers – namely the US and Russia – clashing directly.