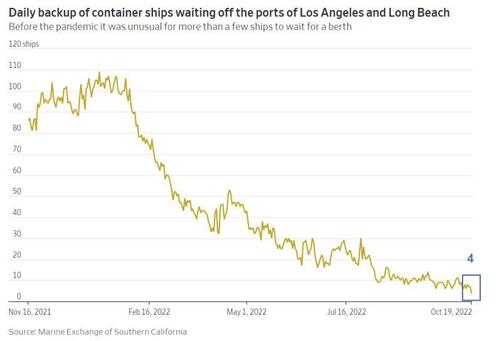 The period between Labor Day and Christmas is typically peak shipping season. Don’t expect much of a peak this year…

No Backlog at California Ports

The real reason that supply chain constraints are easing is because far fewer goods are moving through the supply chain. The last time that the port of LA handled so few loaded import containers in September was during the Great Financial Crisis. https://t.co/faRSdXRz53 pic.twitter.com/aN0JZv1mud

The last positive comparison vs other years was September of 2009 coming out of the great recession.

Today’s daily national truckload index rate was $1.78, just $.03 above the breakeven rate for some of the truckload carriers in the market. Note: this is peak season. https://t.co/n7DPRFzKlh pic.twitter.com/XHr8Tliqr1

We are on the cusp of a Great Purge in trucking capacity, as carriers struggle to keep up with challenging conditions. The latest carrier to shutter. https://t.co/des372S3Lj

Mega ships work well when you have a lot of volume concentrated at single origin points, but less useful when trade is distributed around the world and at much smaller ports. Unfortunately for the container carriers, they will have these massive ships they won’t fill. 2/

The same thing happened in the airline industry. The large mega airliners (A380) were once viewed as the saving grace for the airlines, but were replaced by mid-sized planes that were more fuel efficient, could land in many more locations, and offer more direct service. End.

Doing aerial recon over the port of Newark to figure out where all the containers went after they fell off a cliff w/ @rrpre pic.twitter.com/JyWXnmhZXI

This is why the LTLs and railroads are starting to feel the pain https://t.co/zwGHFi2JDE

Question of the Day

Q: Are we in recession or just headed for one?
A: The question is moot.

Not only does Fed policy operates with a lag, the Fed appears committed to holding rates at a high level for some time. Sooner or later does not matter much. 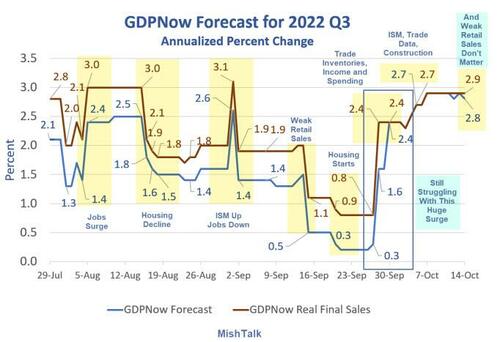 GDPNow data from the Atlanta Fed, chart by Mish

I had bookmarked a recession starting in May, but if GDPNow is close to accurate, the US will have skirted a recession through Q3.

For discussion, please see GDPNow Creator Pat Higgins On the October Surge in the GDP Forecast.

It’s a collapse in imports thus improved balance of trade that caused a surge in the GDPNow model.

The collapse in imports certainly matches the data and analysis of Craig Fuller.

How much the model overreacted or underreacted to that improved balance of trade remains to be seen.

Expect a Long Period of Weak Growth, Whether or Not It’s Labeled Recession

I keep returning to my August 19, 2022 post Expect a Long Period of Weak Growth, Whether or Not It’s Labeled Recession

Lost in the debate over whether recession has started, is the observation that it doesn’t matter much either way.

A Big Housing Bust is the Key to Understanding This Recession

Housing leads recessions and recoveries and housing rates to be weak for a long time.

Add it all up and you have the opposite of the Covid-recession, a long period of economic weakness with minimal rise in unemployment.

It does not matter whether you label this a recession or not. Besides, the NBER might not even announce the recession until it’s over. That happened once already.

The Fed is going to overshoot. Fears of stirring up inflation again will keep them from aggressively reacting.

Many millions of the 22 million boomers age 60+ but still working will retire. This will prevent a huge jump in the unemployment rate that most expect.