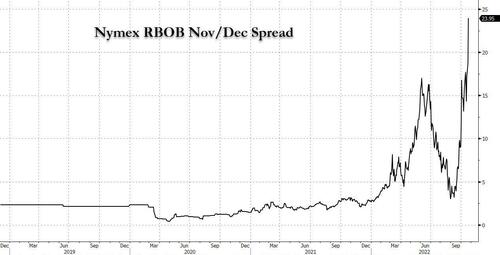 Last week we shared a lengthy discussion on the creeping distillate inventory crisis, which has sent diesel prices sharply higher as the administration has been narrowly focus on gas prices (which have also moved sharply higher since their summer lows), threatening to cripple freight transit just as the economy slides into a recession. But amid the ongoing scramble for refineries, it is now gasoline that is also seeing abnormal (read deeply concerning) price moves as there is just not enough processing capacity to convert all that oil into required amount of both gasoline and diesel.

Let’s start with simple RBOB (i.e., wholesale gasoline) whose November/December spread has blown out to the widest level since data began in 2018…

… as backwardation reached 22.44c/gallon in intraday trading on Monday.

Furthermore, the prompt month spread has also widened to its most bullish since August and around three times what it was this time last year. 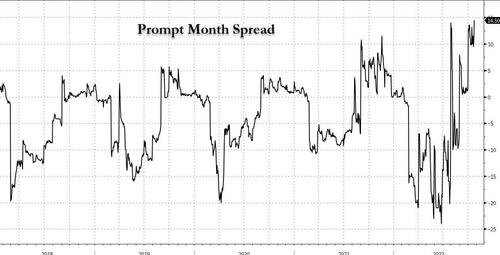 The wider spread signals prompt tightness evident in the physical market: sure enough, spot RBOB in New York is pegged at 10.75c/gallon over futures.

What’s behind the haywire prices? Why shortages of course: and as the next chart shows, New York Harbor regional stockpiles are at their lowest in a decade. 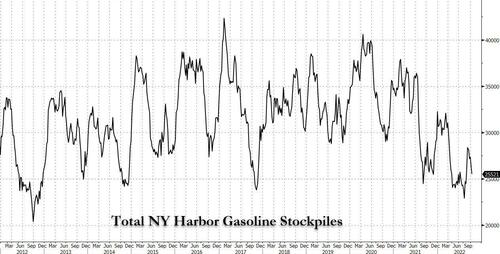 It’s not just the Atlantic region: US West Coast gasoline inventories are at their lowest seasonally on record going back to 1993… 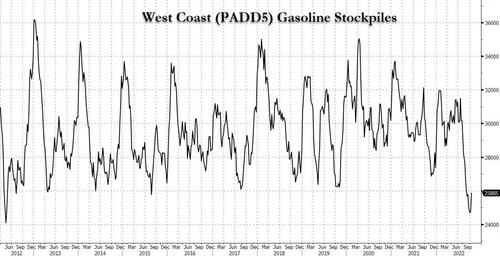 … as imports from Europe have slowed amid ongoing maintenance and refinery strikes.

So what’s a formerly energy independent nation (whose energy policy is currently in the hands of radicalized ‘progressive’ lunatics) to do, to offset these growing gasoline shortages? Why import from China, of course.

According to Bloomberg, Chinese gasoline is making its way to the US for the first time since September 2019 as the country hikes exports at a time when global markets are scrambling for fuel.

The Torm Singapore is carrying around 300k bbl of gasoline components from Huizhou, China, with an estimated arrival in Los Angeles around Nov. 10, according to Kpler and Bloomberg vessel tracking.