China’s Congress Is Over: Has PBOC Just Let The Yuan Go? 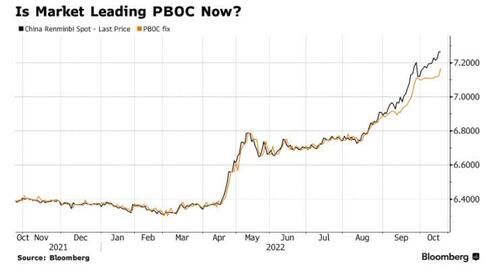 Until Tuesday, the People’s Bank of China had been fighting against yuan depreciation via strong fixings. However, the defense crumbled a bit as soon as the Communist Party Congress was over. The fixing on Tuesday wasn’t as strong as it was in previous sessions, even as the yuan fell to the lowest since 2007.

Is that a fluke or has the PBOC showed more tolerance for yuan depreciation? Wednesday’s fixing will tell us if the PBOC has indeed decided to “lie flat.”

In the days before and during the Party Congress, the central bank effectively kept the fixing unchanged around 7.1 per dollar, putting a temporary floor under the currency. The fixing surpassed analysts survey by Bloomberg by a record last Thursday, suggesting a strong willingness to defend the yuan.

But the depreciation pressure didn’t go away. As a result, traders pushed the yuan almost to the weaker end of its 2% limit relative to the fixing Monday. On Tuesday, the PBOC finally loosened its grip, allowing the reference rate to fall by the most since June. It was still about 5 bps stronger than analysts surveyed, but the deviation was the smallest in a week. As if on cue, the onshore yuan weakened to 7.31 per dollar, the lowest since December 2007, and fell to the lowest against the basket in more than a year.

That marked a change in the PBOC’s strategy, according to Jens Nordvig, founder of Exante Data. It used to be that the PBOC forced the markets to converge to its fixing. Now, the markets are leading the central bank in dictating the currency’s moves. “The fact that they have been trying to create a big gap between fixing and spot, and then have to move to spot, rather than the other way around, is the key,” said Nordvig.  “We are breaking big levels in the process.”

Why such a shift? The PBOC is “more out of bullets than in the past,” said Nordvig. The central bank doesn’t want to burn through its foreign reserves, and it cannot raise interest rates to reduce the depreciation pressure. In addition, the authorities have already closed a lot of capital-account holes. In other words, the PBOC is running out of “easy” ways to control the yuan, he said.

It’s not that the PBOC has completely stopped resisting the depreciation pressure. Right before the PBOC released its fixing on Tuesday, the central bank tweaked a policy to make it easier for companies to seek funding offshore, a move that could potentially add more dollar supply to the onshore market.

But these are only token measures of support for the currency. Brad Setser,  a senior fellow at the Council on Foreign Relations, tweeted: “Until China proves otherwise, it is effectively engaged in a controlled depreciation.”

[ZH: And while all these after-the-fact takes are great, all of this is what we predicted 7 months before it happened]