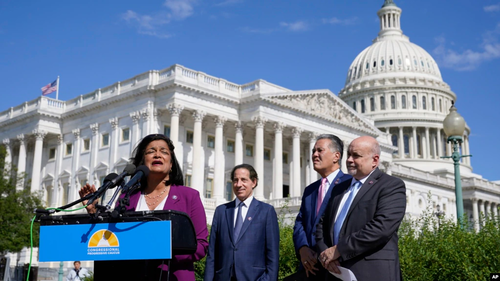 The White House has responded to a new letter sent to President Joe Biden by a group of 30 Progressive Democrats urging what they dubbed a dramatic shift in policy on Ukraine toward prioritizing diplomacy with an aim to urgently get the warring parties at the negotiating table.

“We’ve been very clear: Nothing about Ukraine without Ukraine,” White House Press Secretary Karine Jean-Pierre told reporters on Monday in response to the letter, adding that “this is a decision that President Zelensky is going to have to make when it comes to any type of conversation with Russia, any type of negotiation.”

Rep. Pramila Jayapal had warned in leading the group’s letter, which was also singed by Alexandria Ocasio-Cortez, “The longer the war in Ukraine goes on, the greater the risk of escalation — to widespread, devastating effect.” She said “my colleagues and I are urging the Administration to engage in a proactive diplomatic push in an effort to seek a realistic framework for a ceasefire.”

The letter had also warned of the possibility of nuclear war, especially if the US doesn’t make efforts toward a diplomatic track with Russia, but many have also noted the glaring contradictions – such as talk of still supporting ongoing massive military aid to the Ukrainians.

US National Security Council spokesman John Kirby also responded Monday, stressing that “We’re not going to have conversations with the Russian leadership without the Ukrainians being represented.” He added, according to The Washington Post, “Mr. Zelensky gets to determine – because it’s his country – what success looks like and when to negotiate.” Kirby explained that while the White House “appreciates [the lawmakers’] very thoughtful concerns,” it remains that Russia’s Putin could choose to end the conflict “at any time.”

The Democrats’ letter was further mocked by a handful of pundits highlighting its contradictions, and that it was more about optics in order to satisfy far left constituents:

The two-page statement points to the death and destruction Russia’s war in Ukraine is causing in Ukraine and the harmful effects it is having outside the war zone, acknowledges that engaging with Russia is difficult, and reiterates that any resolution needs to be “acceptable to the people of Ukraine.” A lot of people were confused.

The letter “is remarkable in that it mostly calls for what the U.S. is already doing — arming Ukraine, wanting a diplomatic solution, recognizing Russia isn’t currently open to one — but presents this as if it would be a big change,” writes University of Illinois political scientist Nicholas Grossman. The CPC’s concerns “seem to be more about vibes than the actual policy, which makes the pre-election timing particularly curious,” agrees political journalist Ben Jacobs. Talking Point Memo’s Josh Marshall calls the letter’s arguments “completely incoherent” and “contradictory on the key points.”

There is no “dramatic shift” urged in this letter. Rather: the opposite. It’s just PR by the Progressives™ to show they’re politely suggesting diplomacy, which Biden will say he already agrees with. They threaten no tangible legislative action, and endorse the policy status quo https://t.co/RmrGM0woY3

All of this prompted Jayapal to issue a statement in follow-up, perhaps walking back or seeking to clarify elements of the letter…

“In a letter to President Biden today, my colleagues and I advocated for the administration to continue ongoing military and economic support for Ukrainians while pursuing diplomatic support to Ukraine to ensure we are helpful partners on efforts to reach ‘a solution that is acceptable to the people of Ukraine.’ Let me be clear: we are united as Democrats in our unequivocal commitment to supporting Ukraine in their fight for their democracy and freedom in the face of the illegal and outrageous Russian invasion, and nothing in the letter advocates for a change in that support.”

She continued, “Diplomacy is an important tool that can save lives — but it is just one tool. As we also made explicitly clear in our letter and will continue to make clear, we support President Biden and his administration’s commitment to nothing about Ukraine without Ukraine.”

Indeed the follow-up statement does appear to be a walk-back, blunting the initial call urging negotiations or else escalation toward nuclear confrontation looms – as the message of the initial letter emphasized. As journalist Glenn Greenwald observes, while there are some good and rare points on diplomacy that were raised, it remains that “the Progressives’ letter postures as opposition but isn’t really.”