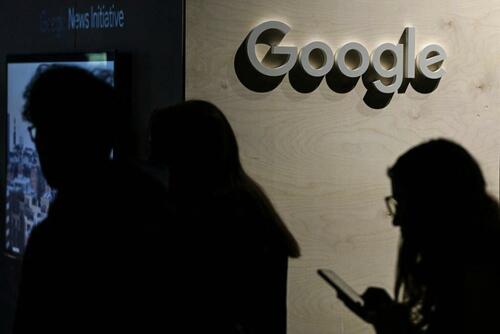 Authored by Daniel Greenfield via The Gatestone Institute,

While MUM’s applications initially appeared to be apolitical, that quickly changed.

Google first unleashed MUM to fight what it considered COVID “misinformation” by making sure that everyone saw “high quality and timely information from trusted health authorities like the World Health Organization”. By reducing the number of sources to only those that agree with its agenda, Google is able to deliver fast results while getting rid of different points of view.

A Forbes article described how MUM would “check information across multiple reliable sources” to allow “the system to come to a general consensus”. Google had once built its search around the vast diversity of a bygone internet, but it has spent the last decade draining the diversity and depth of the pool and replacing it with the shallow manufactured consensus of its agenda.

Google long ago ceased being a way to find different answers and its search results are deliberately repetitive. Search is an illusion. The user thinks that he’s browsing the internet when he’s actually spinning his wheels in Google’s walled garden. This is most obvious in shopping and in politics: two areas where Google has strong interests and tries to manipulate users into believing that they are exploring options when they’re being hand fed variations on a theme.

Or as Pandu Nayak, VP of search at Google, wrote in a recent post, “By using our latest AI model, Multitask Unified Model (MUM), our systems can now understand the notion of consensus, which is when multiple high-quality sources on the web all agree on the same fact.”

The last thing the world needs is another centralized computer system enforcing a consensus.

Google disagrees with many of its users about what “reliable sources” or “high-quality sources” entail. MUM helps the Big Tech search monopoly manufacture a consensus, on what it claims is a universal fact, and to promote snippets on its own site that promote that consensus.

The monopoly doesn’t see its search service as a way to rank sites. The Big Tech monopoly, like its counterparts, doesn’t want users actually leaving its sites, and wants to force a “consensus” answer on them in its search engine. MUM is another tool for keeping users on its digital plantation. The underlying notion behind MUM is a continuing redefinition of search, not as browsing an array of sources, but as a way of delivering a single instantaneous answer.

Googlers have long been obsessed with the idea of replicating Star Trek’s fictional computer which would offer the answer to any question in a robotic female voice.

MUM is the next step in this Big Sister quest.

“The Star Trek computer is not just a metaphor that we use to explain to others what we’re building. It is the ideal that we’re aiming to build—the ideal version done realistically,” Amit Singhal, then the head of Google’s search rankings team, boasted.

Singhal was later forced to leave the company over sexual harassment allegations.

In 2022, Google’s search is hopelessly broken because the company no longer has any interest in providing the search service that made it a monopoly, giving a ranked list of diverse results, but wants everyone to speak into their phones and receive a single answer. The consensus.

Google’s snippets and knowledge panels displace links to actual sites and provide what the monopoly claims is the definitive answer. Its search assistant is similarly set up to provide a single answer. Google doesn’t want you to compare answers, but to listen to MUM.

And sometimes Google wants to give you the information before you ask it.

If you own an advanced Android phone, you may find that Google Assistant will interrupt conversations to offer its own “insights”.

Google is also pursuing “prebunking” of what it considers “misinformation” with preemptive propaganda campaigns.

Jigsaw, the company’s most explicitly political arm, is researching what it calls “prebunking” or attacking views it opposes before they can even gain traction. Prebunking is currently being experimentally tested by Google’s Jigsaw to fight “misinformation” in Poland and other Eastern European countries against Ukrainian migrants. This is only a test and Jigsaw expects there to be much wider application for the information techniques that its “researchers” are developing.

Google’s YouTube already has a broad set of bans covering everything from questioning global warming, contradicting medical experts, and debating 2020 election results. These are a window into the company’s political agendas and how it seeks to enforce political conformity.

While it seeks to narrow the sphere of acceptable information in its platforms, Google is working with the leftist Poynter Institute, one of the most notoriously biased fact check spammers, to develop “media literacy.”. The company claims to have spent $75 million on efforts to fight “misinformation.” And who determines what misinformation is? He who controls the algorithms.

As the midterm elections approach, YouTube spokeswoman Ivy Choi, promised that the video site’s recommendations are “continuously and prominently surfacing midterms-related content from authoritative news sources and limiting the spread of harmful midterms-related misinformation.” The technical term for this is mass propaganda. That’s what Big Tech does.

The internet was revolutionary because it upended the central systems of mass propaganda which allowed a government and a handful of men to enforce their consensus on a helpless public through the mass media of newspapers, radio stations, movie theaters and television sets. Big Tech’s Web 2.0 killed the revolution and restored the oligarchy. Its monopolists see the internet as only a faster way to deliver more immersive propaganda to the masses.

The Big Tech monopolies took off by taming the web, shrinking its vast promise and diversity of content into smaller walled gardens that they could dominate and monetize. Facebook inhaled most of the social interactions on the internet and locked it up in its private platform. Google is determined to do the same thing to the bewildering parade of ideas of the entire internet.

Conservatives are one of the cultural barriers because their existence is a marked reminder that Big Tech does not control everything. While its executives and employees are socially insulated wokes operating in major urban centers, they manage systems that extend around the country and the world. When they encounter different points of view, they seek to wipe them out.

MUM is yet another tool for enforcing a totalitarian conformity on the diversity of the internet.

Google doesn’t want you to think differently or to think for yourself. What it wants users to do is to shut up and listen to Big MUM.