They Blinked: Bank of Canada Hikes Less Than Expected, Sparking Debate If Fed Will Also “Surprise” Next Week

First it was Australia, now it is Canada’s turn to hike less than expected.

Moments ago Canada’s central bank unexpectedly slowed its pace of hiking, increasing its benchmark interest rate by just 50 basis points (to 3.75%) rather than the 75-basis-point hike expected by both markets and most economists. This was the smallest hike since June (July was 100bps, September 75bps). It appears a bigger move was too much to stomach in a decision that also saw Governor Tiff Macklem and his officials raise the prospect the economy could fall into a technical recession.

To justify its decision, the bank revised down its growth forecasts, predicting the economic expansion will stall and possibly even contract in coming months. The Bank of Canada also expects inflation will fall sharply to below 3% by the end of next year – within its target range for the first time since early 2021 – as higher borrowing costs curb spending.

“Future rate increases will be influenced by our assessments of how tighter monetary policy is working to slow demand, how supply challenges are resolving, and how inflation and inflationary expectations are responding,” the bank said in the rate statement.

To somewhat ease the impression it is turning dovish, the Bank of Canada reiterated that it “expects” to continue raising interest rates saying that “given elevated inflation and inflation expectations, as well as ongoing demand pressures in the economy, the Governing Council expects that the policy interest rate will need to rise further”, and retained hawkish language on inflation. But the surprise move will raise questions about the central bank’s appetite to impose further damage on Canada’s economy.

That said, there was little in the statement that would indicate what it all means for the terminal rate, currently expected by markets to hit 4.5% by early next year. According to Bloomberg, the central bank may just want to get there more slowly, but officials also may be rethinking how much the nation’s highly indebted households can cope with higher borrowing costs. Macklem may have more to say on this at his 11 a.m. press conference. The Bank of Canada reiterated in its Monetary Policy Report that it estimates its nominal “neutral rate” for the economy at about 4.5%, similar to the US.

“We are resolute in our commitment to restore price stability for Canadians and will continue to take action as required to achieve the 2% inflation target,” the bank said.

But what is most important, is that the half-point hike means the Bank of Canada – viewed by some as a “leading indicator” for the Fed – could be moving out of step with the US Federal Reserve, which is expected to hike by 75 basis points next week. It’s a risky attempt at divergence that will merely weaken Canada’s currency, loosen financial conditions, drive up prices for imported goods and fuel inflation further. Essentially, unless inflation does slow sharply, the BOC will merely have to hike more.

It is also true that the smaller-than- expected rate hike comes amid an increasingly pitched political debate over monetary policy in North America. Macklem is taking fire from both sides of the political spectrum in Canada (and at least one former official in the Liberal government) and the decision will raise questions about whether the political heat is getting too hot for Macklem.

Come to think of it, following yesterday’s letter from the Democratic head of the US Senate banking committee calling on Jerome Powell to stay focused on employment as the Fed attempts to stabilize prices, i.e., stop hiking or any spike in unemployment will see Democrats squarely blaming the Federal Reserve.

The Bank of Canada also joins Australia’s central bank in easing off the brakes — with officials in both countries sharing worries about the impact of higher rates on highly indebted households. The Reserve Bank of Australia ended its streak of half-percentage-point hikes on Oct. 4, opting instead to raise the cash rate by 25 basis points to 2.6%.

Canadian policymakers have hiked interest rates by 3.5 percentage points since March, one of the most forceful tightening cycles in the central bank’s history. Before the announcement, markets were anticipating a couple of smaller increases in coming months. But in the rate statement, Macklem and his officials said tighter monetary policies globally are beginning to weigh on activity around  the world. The Bank of Canada is now forecasting hardly any economic growth in the US next year.

While the Canadian economy continues to operate in excess demand, the effects of higher borrowing costs “are becoming evident in interest-sensitive areas,” the bank said. “Economic growth is expected to stall through the end of this year and the first half of next year as the effects of higher interest rates spread.”

The central bank cut its gross domestic product forecast for 2023 by half to 0.9%. It predicted economic growth will decelerate to an annualized 0.5% pace in the fourth quarter of this year.

Officials in Canada may also be increasingly worried about growing financial stability risks associated with higher interest rates. In the MPR, the bank highlighted how “financial stresses” have increased globally.

Predictably, in kneejerk reaction the Canadian dollar tumbled after the central bank hiked by less than expected… 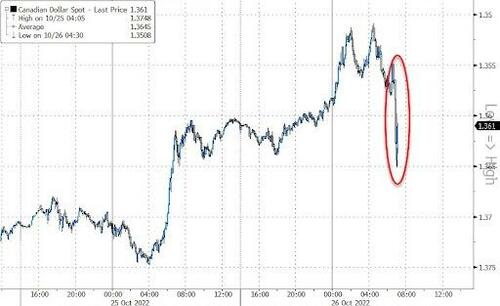 … while Canadian bonds surged, dragging US Treasries behind them. Canada 2-year yield tumbled to 3.931% at 10:06 am ET, down as much as 22 basis points from its level just before the decision came out, while Canadian 10-year note futures surged through 123.00 level and onto highest since Oct. 5. , supporting front-end US rates as the 2s10s curve re-steepens. US yields richer by 9bp to 11bp across the curve, following wider gains across the Canadian curve; 10-year US futures top at 111-08+ with more than 30k contracts traded over 3-minute period, highest volume spike of the session.

Bottom line: as more and more central banks are openly blinking, we may finally be on the verge of the long-awaited pivot.